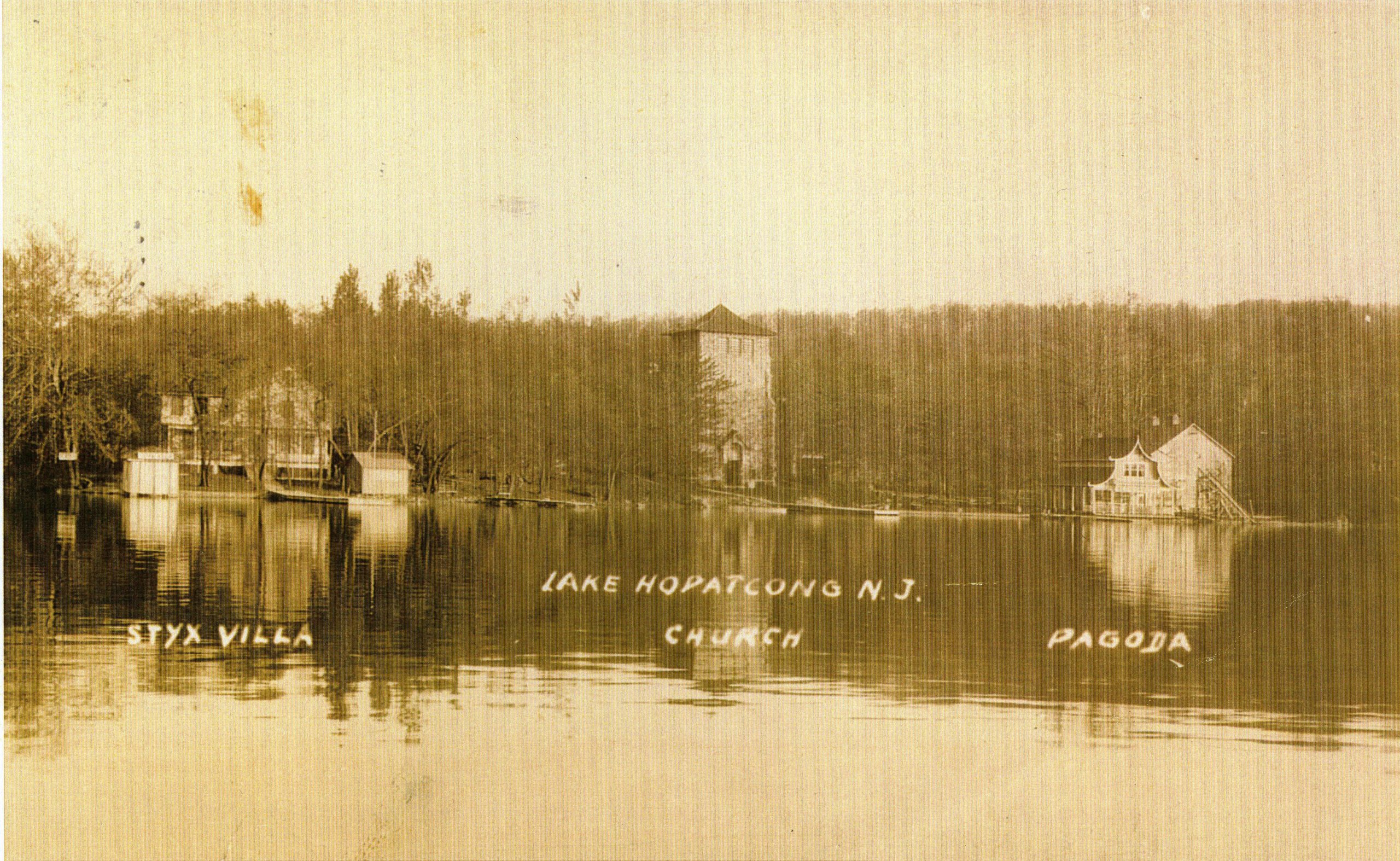 At the end of River Styx Cove next to the River Styx Bridge lies one of the more interesting historical sites at Lake Hopatcong.  Now the home of Pavinci’s Italian Grill, Johnny’s Marina, and The Barber Shop Studios, this area has evolved greatly over the years.

River Styx Cove was sparsely developed in 1906 when Martin Kjellman had the idea to establish a houseboat as a refreshment stand.  The August 11, 1906 edition of the Lake Hopatcong Breeze reported that, “the house boat on the Styx is pictured on souvenir postcards.  Martin Kjellman, the Captain, does his utmost toward keeping the Styx dwellers cool.”  In 1908, the houseboat was advertised as “the most unique and popular place on the lake for all kinds of refreshments, such as ice cream, fancy biscuits, orangade, soft drinks, etc.  Cigars, tobacco and souvenir postals for sale.”  To convince early boat owners that River Styx Cove was too shallow to navigate, advertisements for the houseboat were careful to state “water deep enough for launches.”  Kjellman’s idea was successful and his business grew. 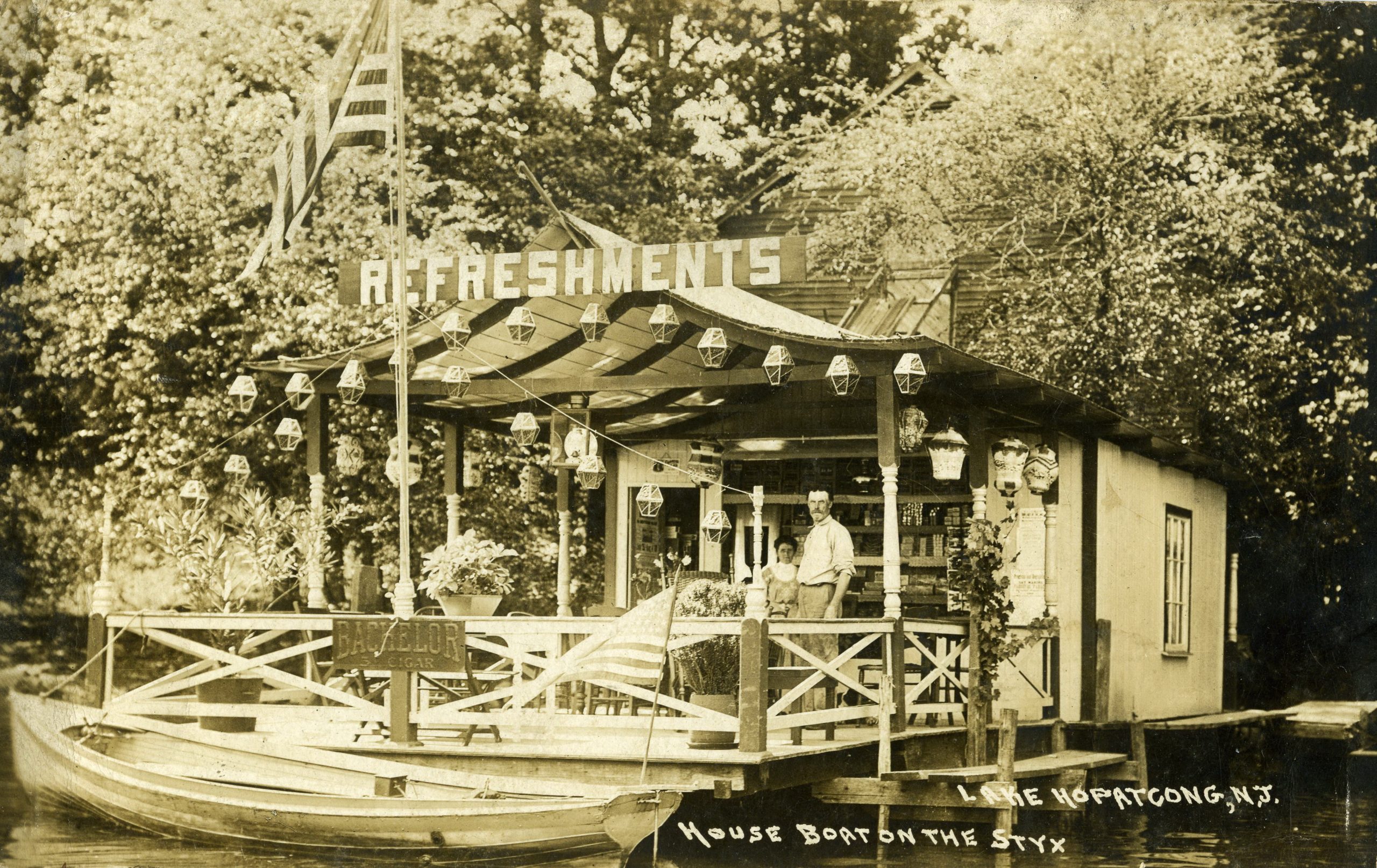 The June 29, 1912 edition of the Breeze reported that, “the houseboat on the Styx, is no more.  It has changed into something better and more beautiful, as a butterfly comes forth from its crysallis.  It is now the Pagoda, which the dictionary informs us means a Hindu temple.  The Pagoda in the Styx is indeed a temple of pleasure and as the Hindu worshipers gathered in the evening for their services to the setting sun, so the nature worshipers of Lake Hopatcong in the cool of the evening wend their way in launch or silently paddled canoe to Brother Kjellman’s Pagoda in the Styx.  The Pagoda is the hand work of Mr. Kjellman and his efficient little wife, Mother Kjellman.  The structure with its wide porches, white columns and unique roof makes a pretty picture and is well worth a visit in itself to say nothing of the dainty refreshments served there for a consideration by the busy hands of Mrs. Kjellman.”

While the Breeze reporter may have been a bit confused over the Hindu origins of pagodas, one can imagine how surprised visitors arriving for the 1912 season were to see this new structure in River Styx.  How odd it must have seemed to enjoy a refreshment in this Asian inspired building while looking across River Styx at the imposing hotel Castle Edward, built to resemble a European castle.

The early Pagoda featured such items as Schrafft’s Chocolates, Viedt’s Ice Cream, film, and postcards.  Customers were served on an open-air porch. 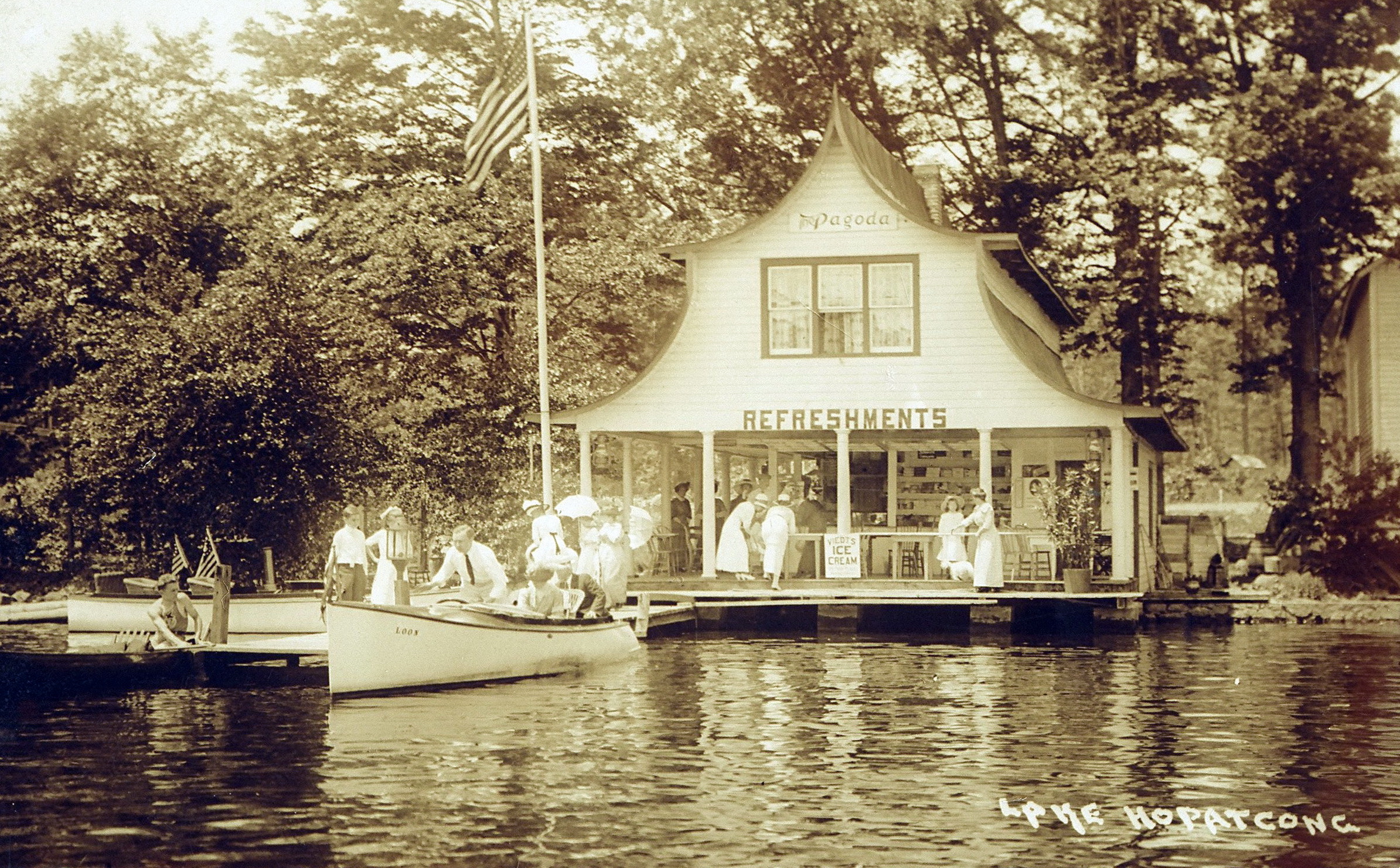 In the late 1920’s, the Kjellman’s sold the Pagoda to Emil and Anna Osterblom and it would remain in the Osterblom family for nearly forty years.  Emil was a master carpenter and enclosed the store, adding restaurant seating and a luncheonette counter equipped with a soda fountain.  He also added living quarters in the back of the store for the Osterblom family.  By 1940, the Pagoda had added a swimming dock, housed the Post Office, and even offered “Goody’s Bike Station” where visitors could rent bikes for 25 cents per hour or $1.50 per day.  During this period, Emil constructed summer rental bungalows, some of which still survive today on River Styx Road.  He also built wooden rowboats and canoes which became a cornerstone of the Pagoda’s business.  Following World War II, the Pagoda added gas pumps for both cars and boats.  By 1951, the reins of the business were transferred to their son and his wife, Roberta and Bertha Osterblom.  Robert expanded the boat rentals to include motorized fishing boats and ski boats, eventually reaching a total of some 40 watercraft. He also added additional dock space which allowed for boat slips to be rented. In keeping up with the 1950s, pinball machines were added to the store as well as a jukebox where a quarter got you three songs.  Robert and Bertha’s sons – Robert, Jr. and Gary – became the newest members of the family to lend a hand. 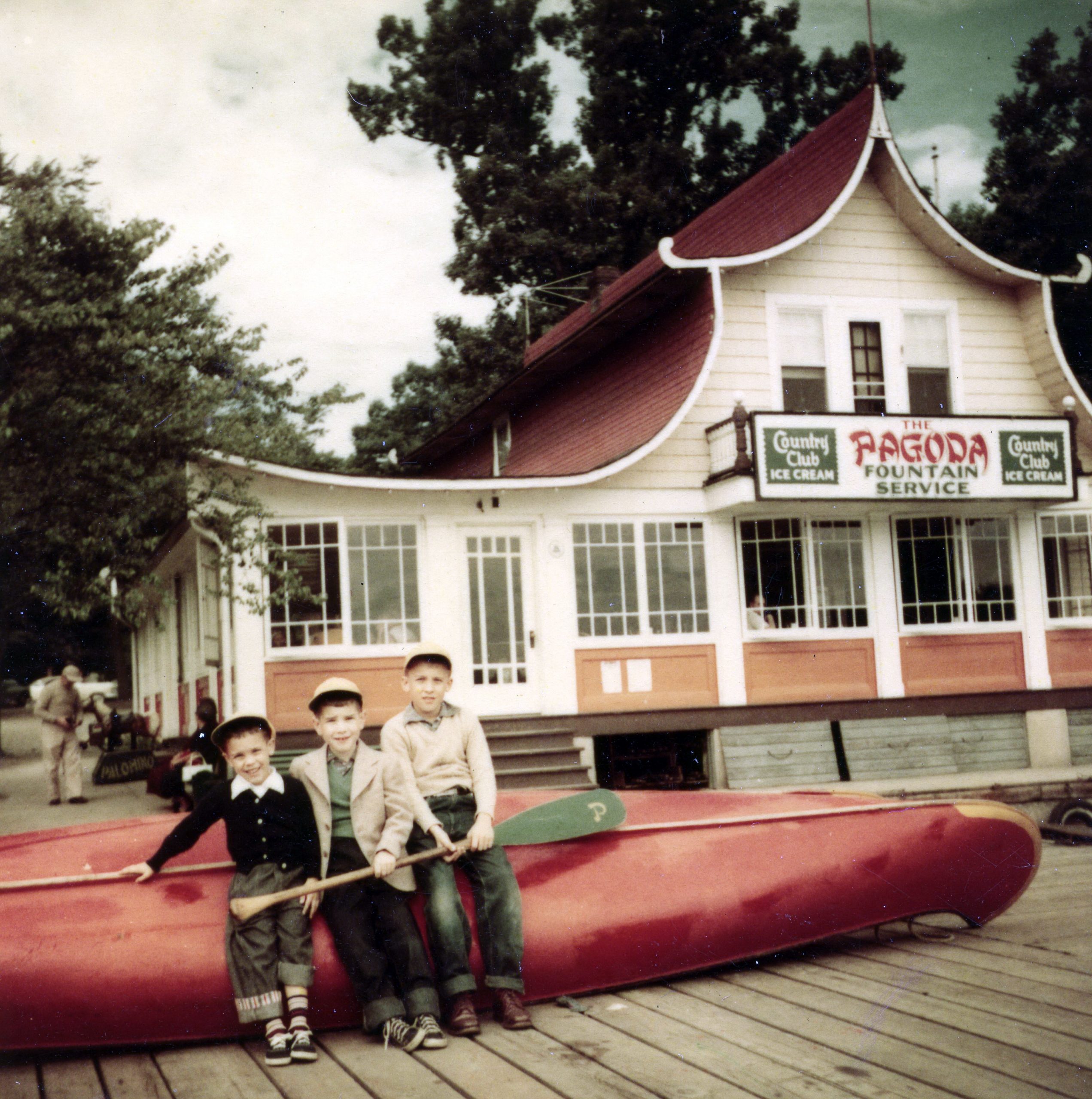 The Osterblom’s sold the Pagoda in the mid-1960s to Lennie Eisenstein.  Eisenstein envisioned the Pagoda as a full-service restaurant and built another addition which he called the Lobster Shack.  Len E’s Pagoda and Lobster Shack was very successful.  When the church next door became available, Eisenstein had even grander plans.

The first church services in the Borough of Hopatcong were held by Reverend Dr. T.A.K. Gessler at Tangle Wild, his property in Davis Cove, during the late 19th and early 20th centuries.  After the Hopatcong School (which would later become Hudson Maxim School) was built in River Styx in 1908, church services were conducted in the one-room school.  At the time, local residents took note that the borough had a jail but still no church.  In 1911, residents erected the borough’s first church. 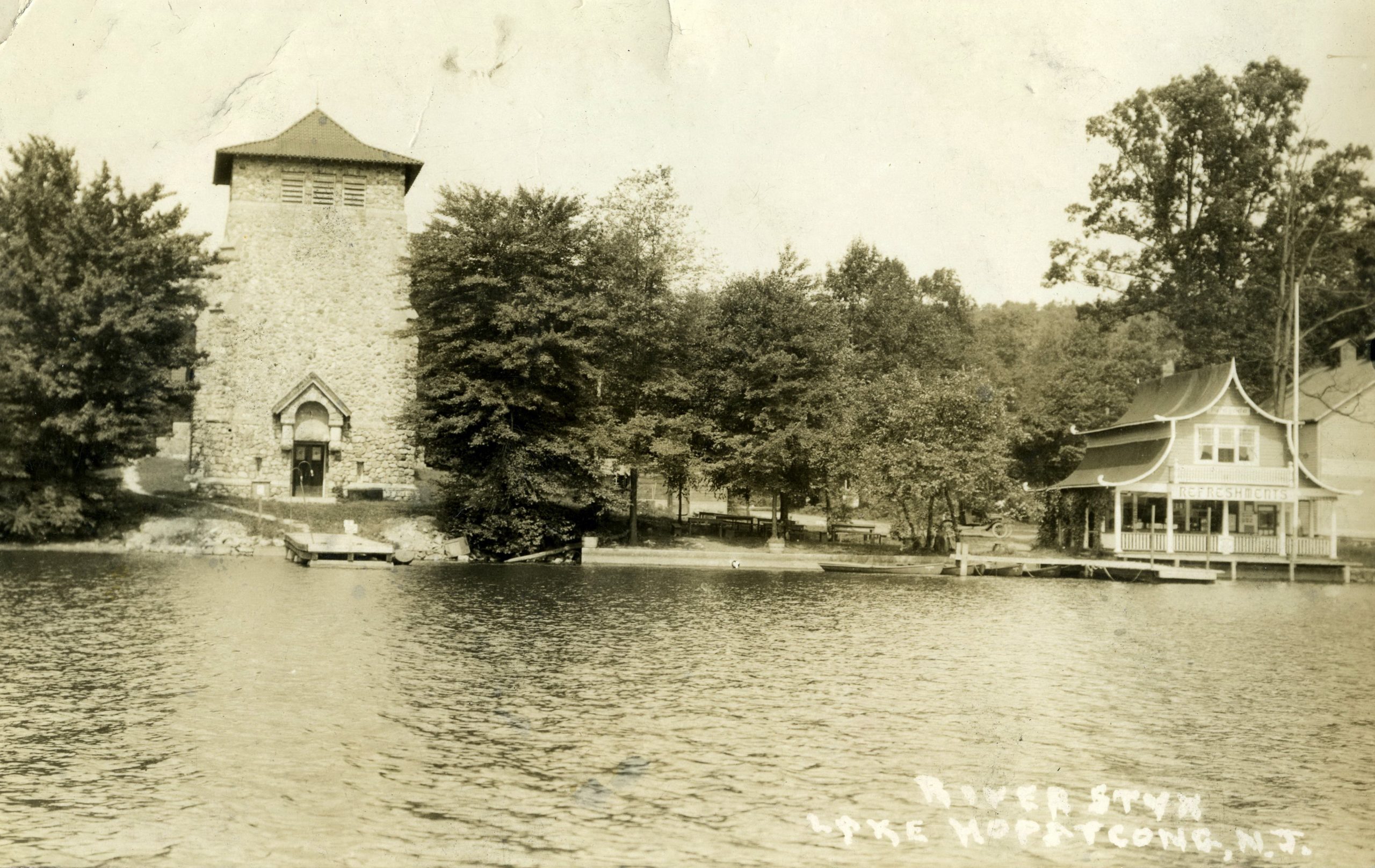 The cornerstone for the West Side Church was laid on July 2, 1911.  The church was nondenominational and the Reverend Dr. Gessler preached there until his death in 1925.  In 1949, following a vote of the congregation, the church became the West Side United Methodist Church.  Following a fire in 1968 which gutted the inside of the church, the congregation decided more space was needed.  A new church was built across River Styx Bridge on Maxim Drive, and opened in 1971.  At the time, it looked like the old West Side Church structure would be headed for the wrecking ball.

However, Lennie Eisenstein had another idea.  Having recently doubled the size of the Pagoda, he bought the church building and connected it to his existing establishment, creating one very large restaurant.  While it created an unique venue, the expansion proved a step too far.  Overextended financially, the restaurant was forced to close.  The business reopened under new owners as the Jolly Buccaneer in 1975, and after being sold again became the Lighthouse in 1978.  After a year operating as a dinner theatre, the Lighthouse latched onto the disco craze of the late 1970’s becoming one of the most popular clubs in New Jersey and drawing customers from a wide area (much to the consternation of some local residents).  It featured a large disco floor and numerous bars on multiple floors.  The steeple of the church served as the Rock Room, a unique venue for live bands.  The Lighthouse closed in the mid-1980’s, and several other restaurants subsequently came and went.  It was during this period that the unique remaining portion of the Pagoda roof was covered.  It still remains under the existing roof should any future owner want to revisit the original Pagoda theme. 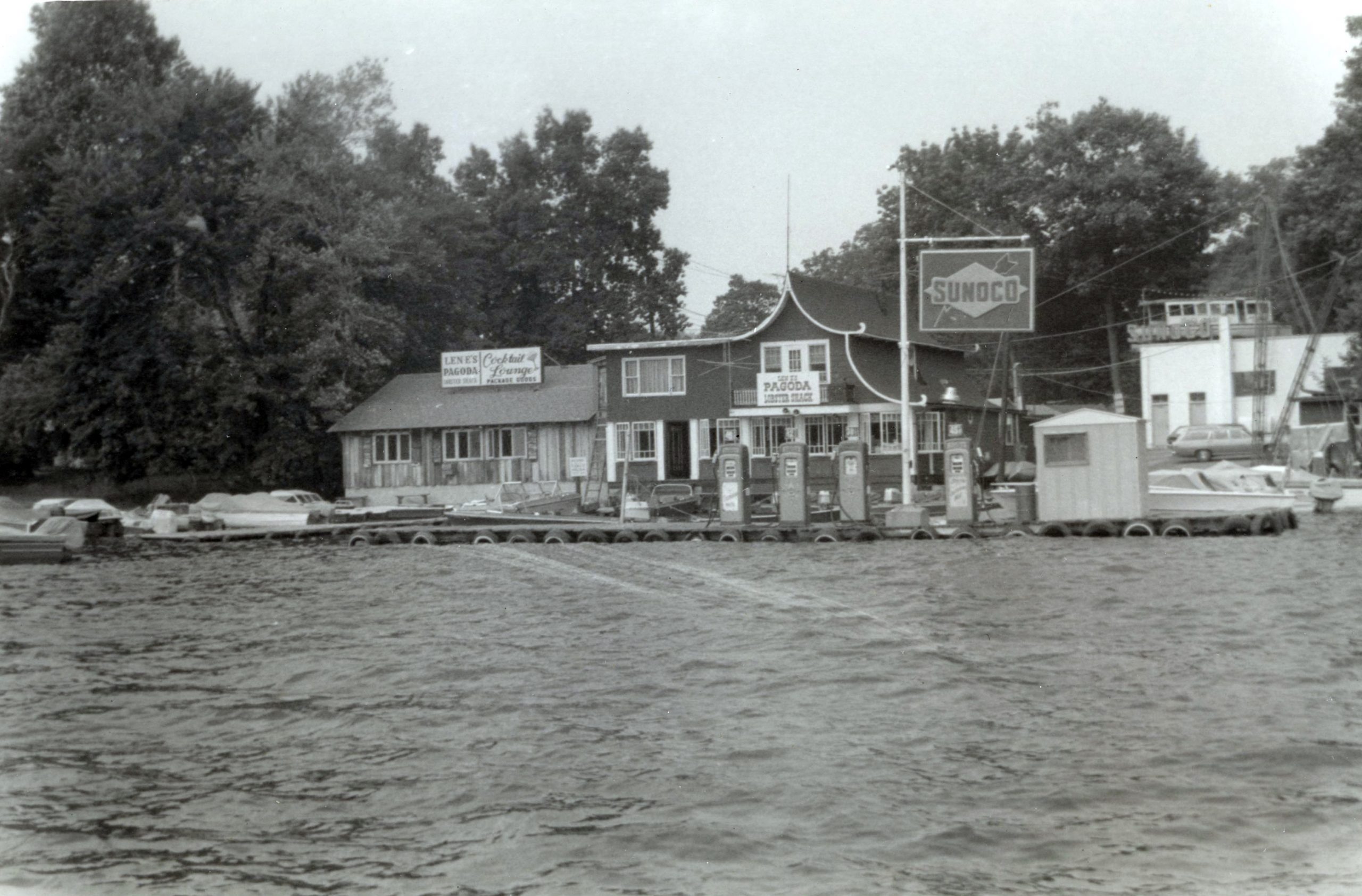 With the turn of the century, the property was split into three different businesses and given fresh life by new property owners Scott Barber and Mark Salamone.  Johnny’s Marina (run by Johnny Salamone, Nick’s father) uses docks and office space in the original Pagoda portion of the building.  Pavinci’s Italian Grill, owned by Mario Ferra, has successfully occupied the section between the original Pagoda and church (formerly the Lighthouse’s Disco Floor).  As for the church structure, Barber and Salamone established The Barber Shop, an amazing state-of-the-art recording studio.  Celebrating its 15th anniversary this year, The Barber Shop is now owned by Barber and managed by his son Ryan.  An extensive list of bands and celebrities has traveled to Lake Hopatcong to record at the studio. 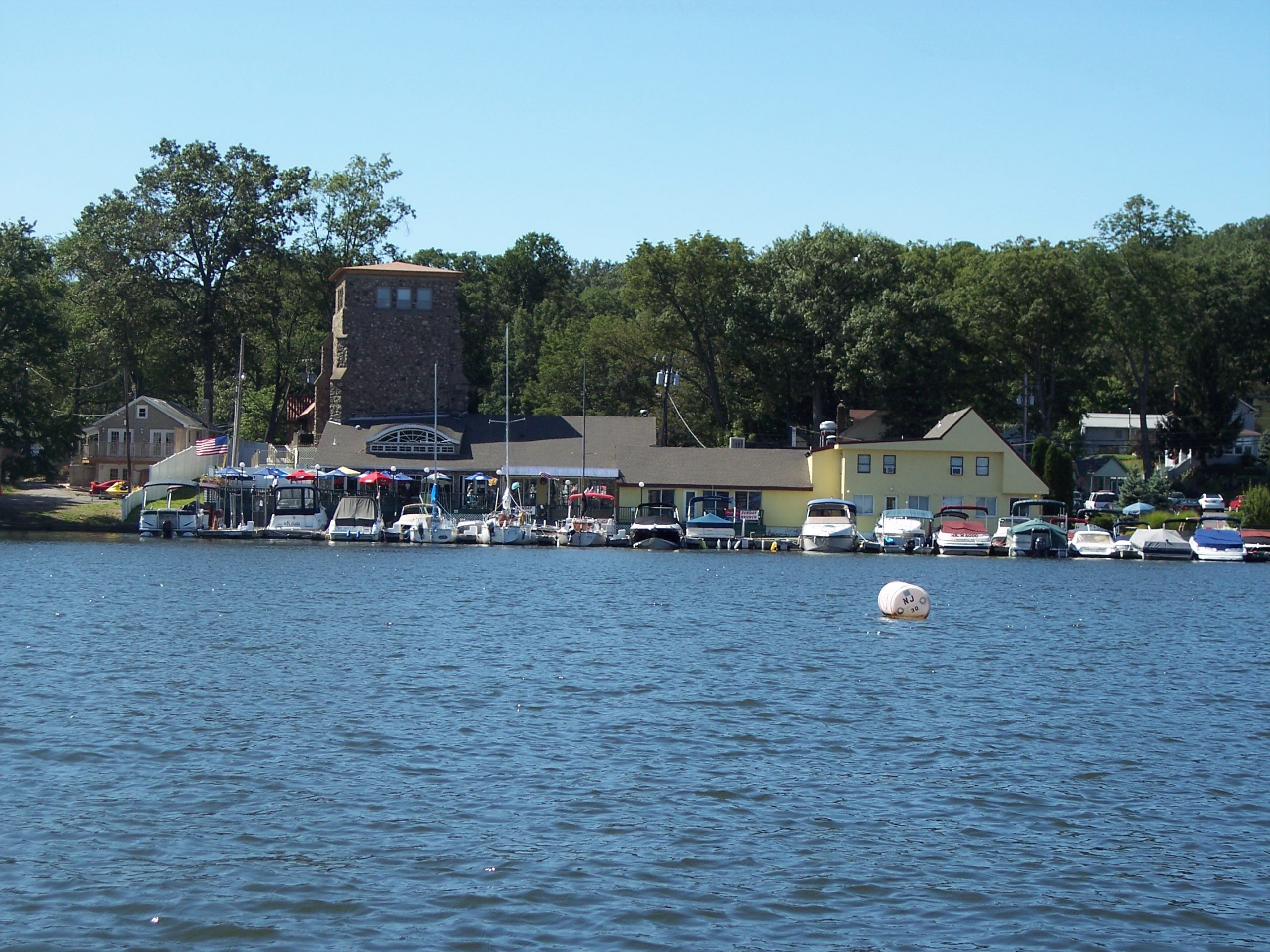 While much has changed in the 115 years since the houseboat first arrived in River Styx, this site continues to make Lake Hopatcong a more interesting and vibrant place. 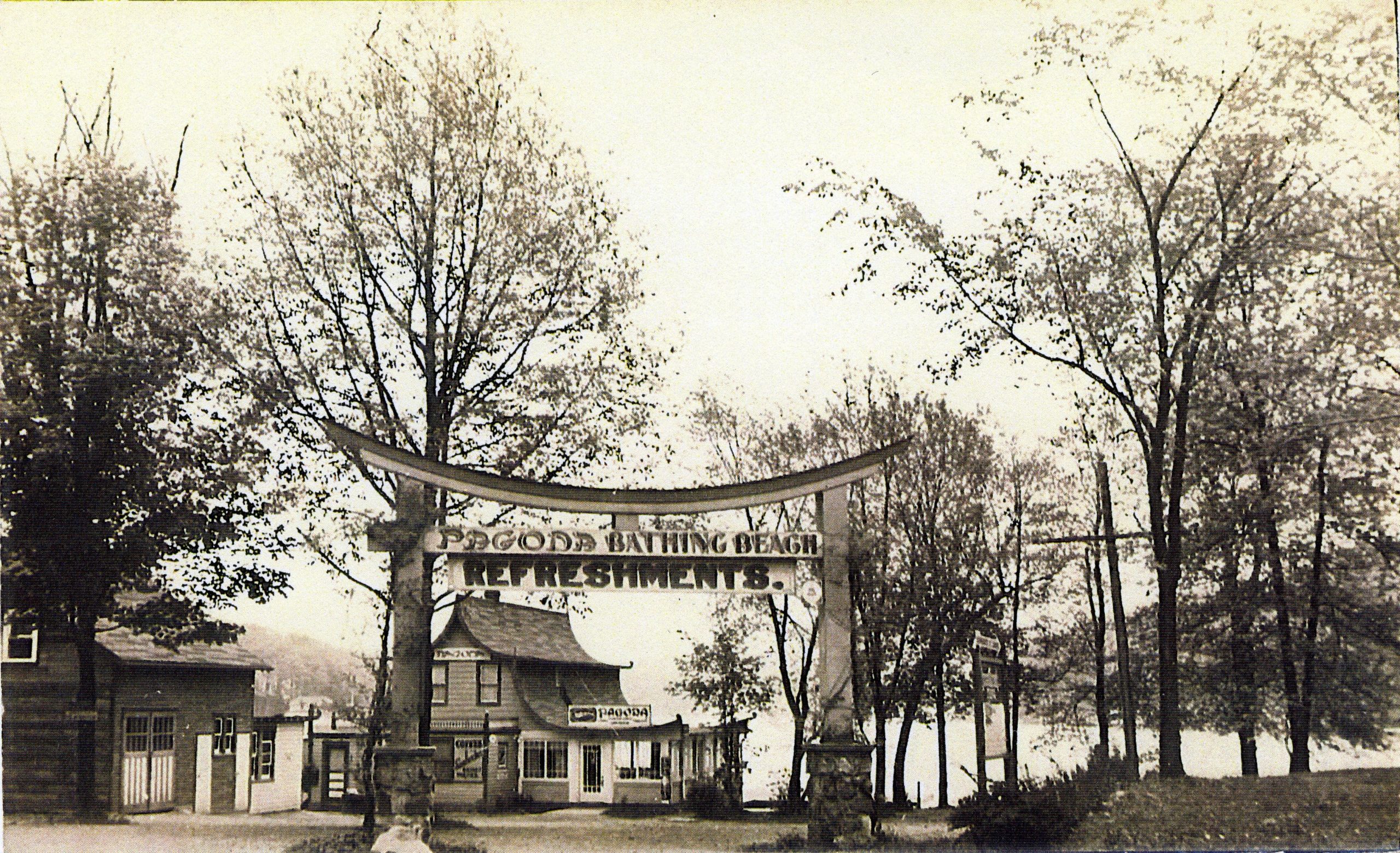 The Most Versatile Man in America, Hudson Maxim

The Crowds Still Come to Nolan’s Point, The Windlass