Is it really possible that Bertrand Island Park has been closed over 35 years?

Of all the attractions and amusements that have existed at Lake Hopatcong, none was more beloved than Bertrand Island Park. A class trip or family outing to the park was a long awaited and much anticipated event for generations of children. For many local youngsters it was the first place they were allowed to go without parents. For countless area teenagers, Bertrand Island provided a wonderful summer job. 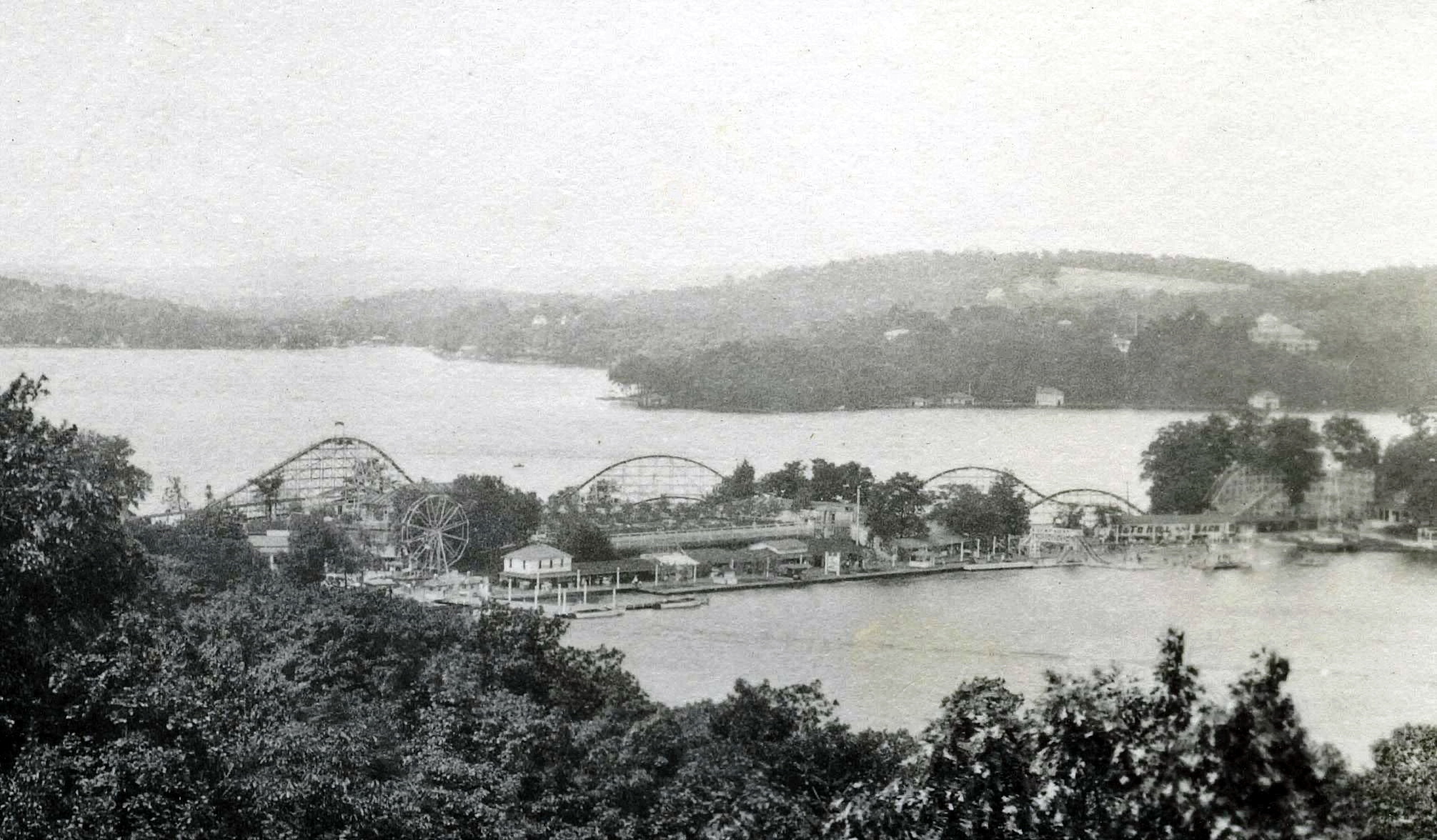 The story of Bertrand Island Park began in 1905 when the former property of the Bertrand Island Club was sold to a group of men with grandiose development plans. While their ideas never came to fruition, they did create a beach at Bertrand Island that soon became a popular spot for swimming. In 1910, when the Morris County Traction Company was looking for an attraction to entice people to ride their trolleys on weekends, it extended service from Landing to the beach at Bertrand Island. To capitalize on beachgoers, a dance hall and various amusements were soon added. 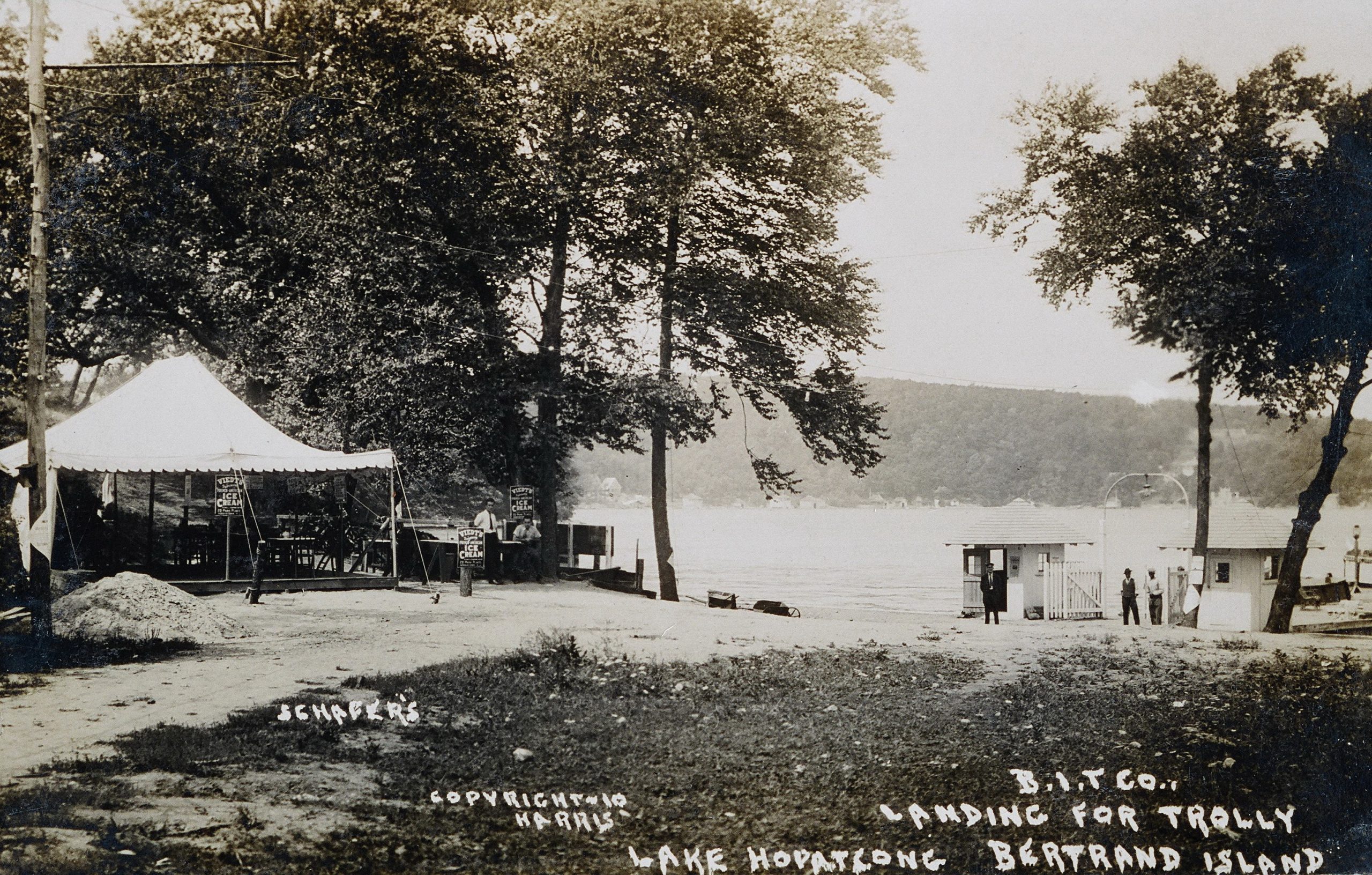 In 1919, Louis Kraus, a teacher from Newark, purchased much of the land at Bertrand Island and established the California Lodge hotel. Kraus quickly realized that the real potential at Bertrand Island was in the amusement business and began to focus his attention on developing an amusement park. In the course of the next five years he greatly expanded the park, adding a boardwalk, electric lights and many of the pavilions and amusements, which would remain for the park’s duration. 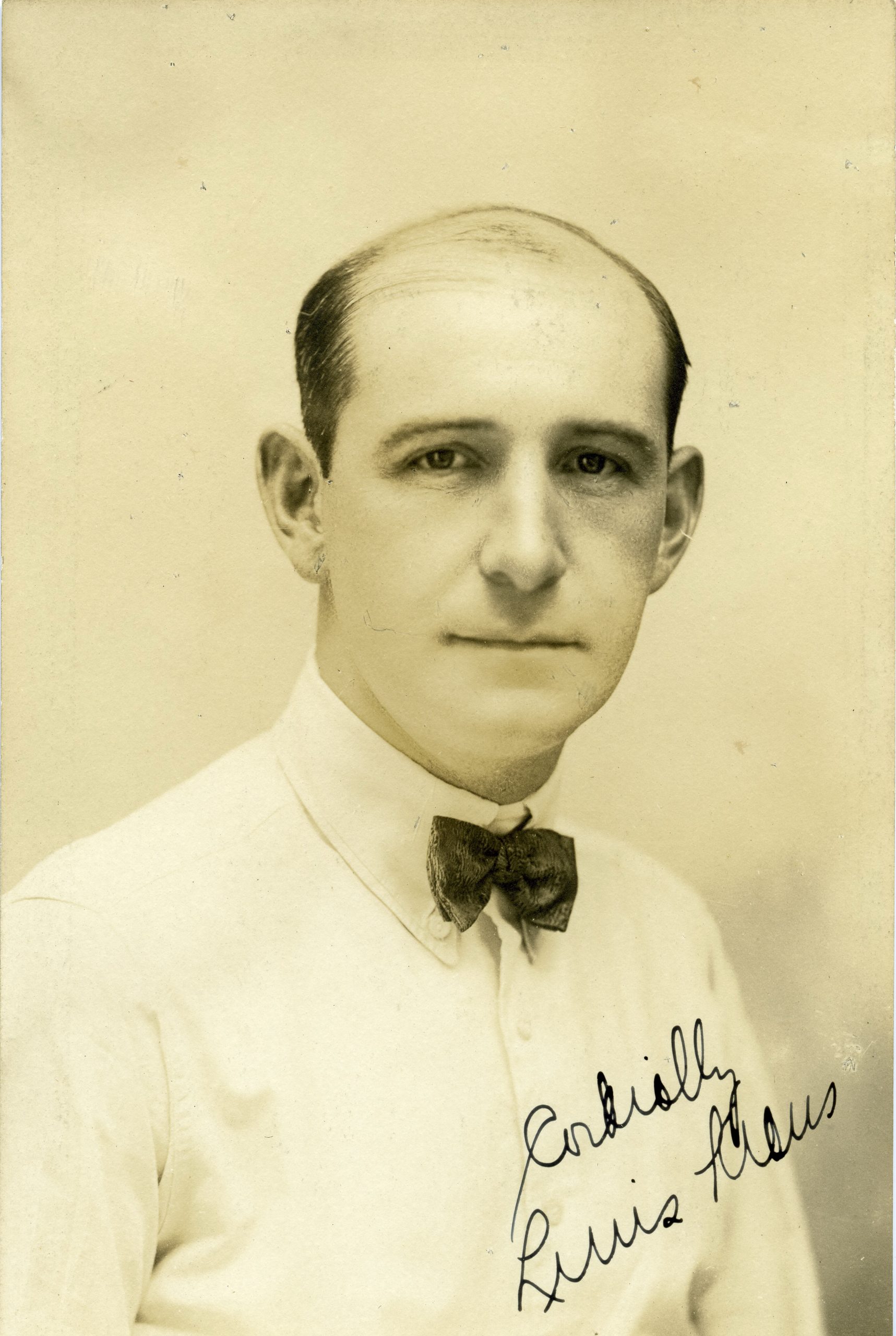 Although Kraus did not own or operate the rides or games, renting space to concessionaires instead, he was a master of promotion and Bertrand Island quickly grew in popularity. The 1920s saw the addition of a Ferris wheel, roller coaster, Dodgems aeroplane swing, the Old Mill (later renamed the Lost River), sightseeing boats, the Whip, and much, much more. Built in 1925, the roller coaster was the first in northern New Jersey. The famous Illions Supreme carousel arrived in 1937 and various rides and games would be added over the years to meet the current fads and trends. 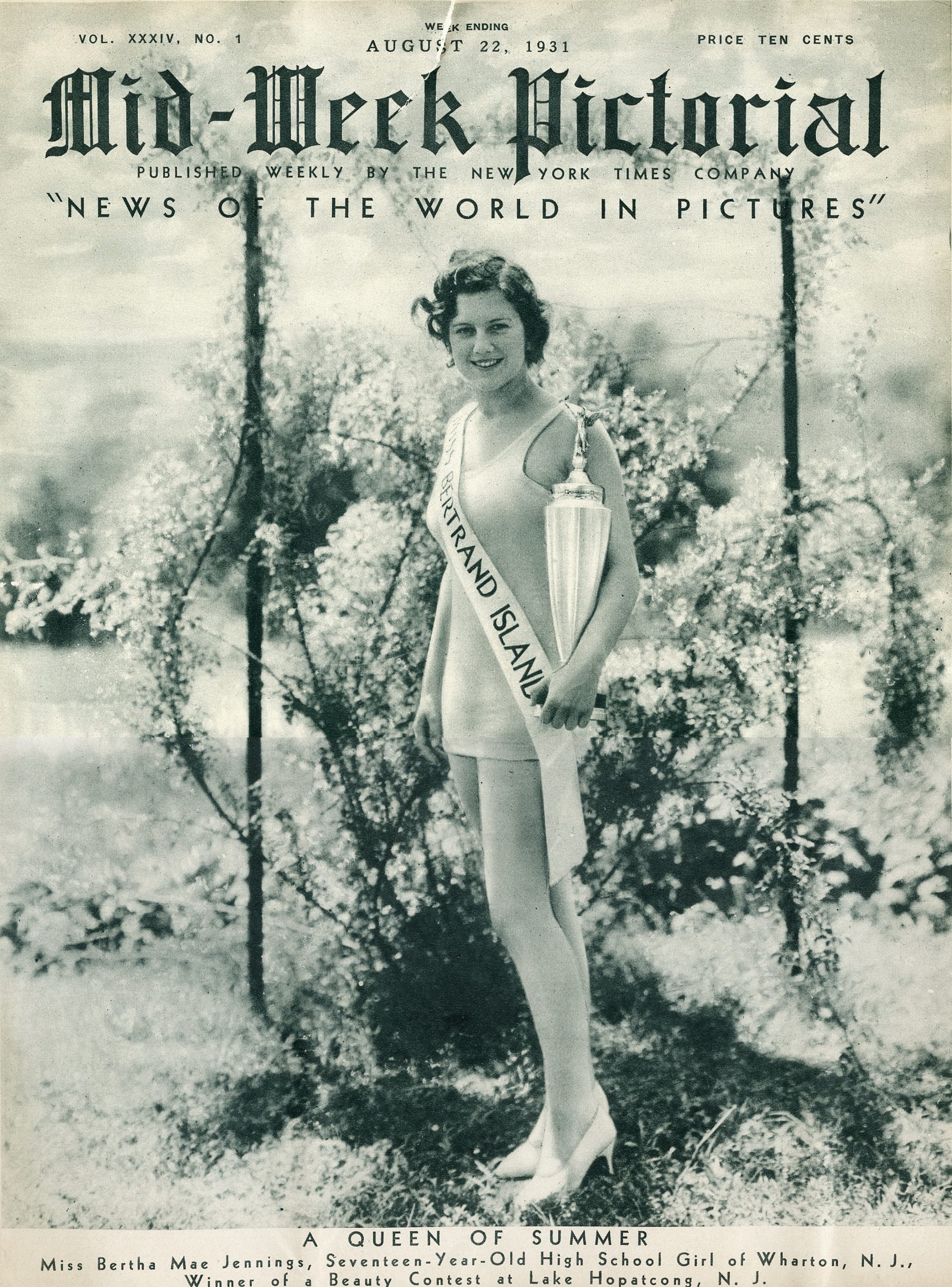 In 1948, still feeling the effects of the Depression and the war years, Kraus decided to sell the park to Lorenzo D’Agostino and his son, Ray, and Larry Donofrio, who were concessionaires under Kraus. Recognizing the value of his experience, the new owners asked Kraus to continue to help manage the park, which he did until his death in 1955. Following his father’s death in the 1960s and Larry Donofrio’s decision to sell his share shortly thereafter, Ray became sole owner of the park and would remain so until 1978.In many ways the 1950s and 1960s were golden years at the park, and it was filled with locals, summer residents and folks visiting Lake Hopatcong for the day. Bertrand Island was a favorite spot for school, business and church outings. The park seemed to fill a perfect niche at Lake Hopatcong. While discount nights had been introduced at Bertrand Island during the Depression, in 1950 Mondays and Thursdays were deemed “Nickel Nights,” which provided a tremendous boost in attendance and forever endeared the park to thousands of youngsters, who arrived with a dollar or two and kept busy all night as every ride cost just five cents. One of the most popular postwar additions was Kiddieland, which debuted at Bertrand Island in 1951 and featured rides scaled solely for children. It was particularly popular on Nickel Nights. 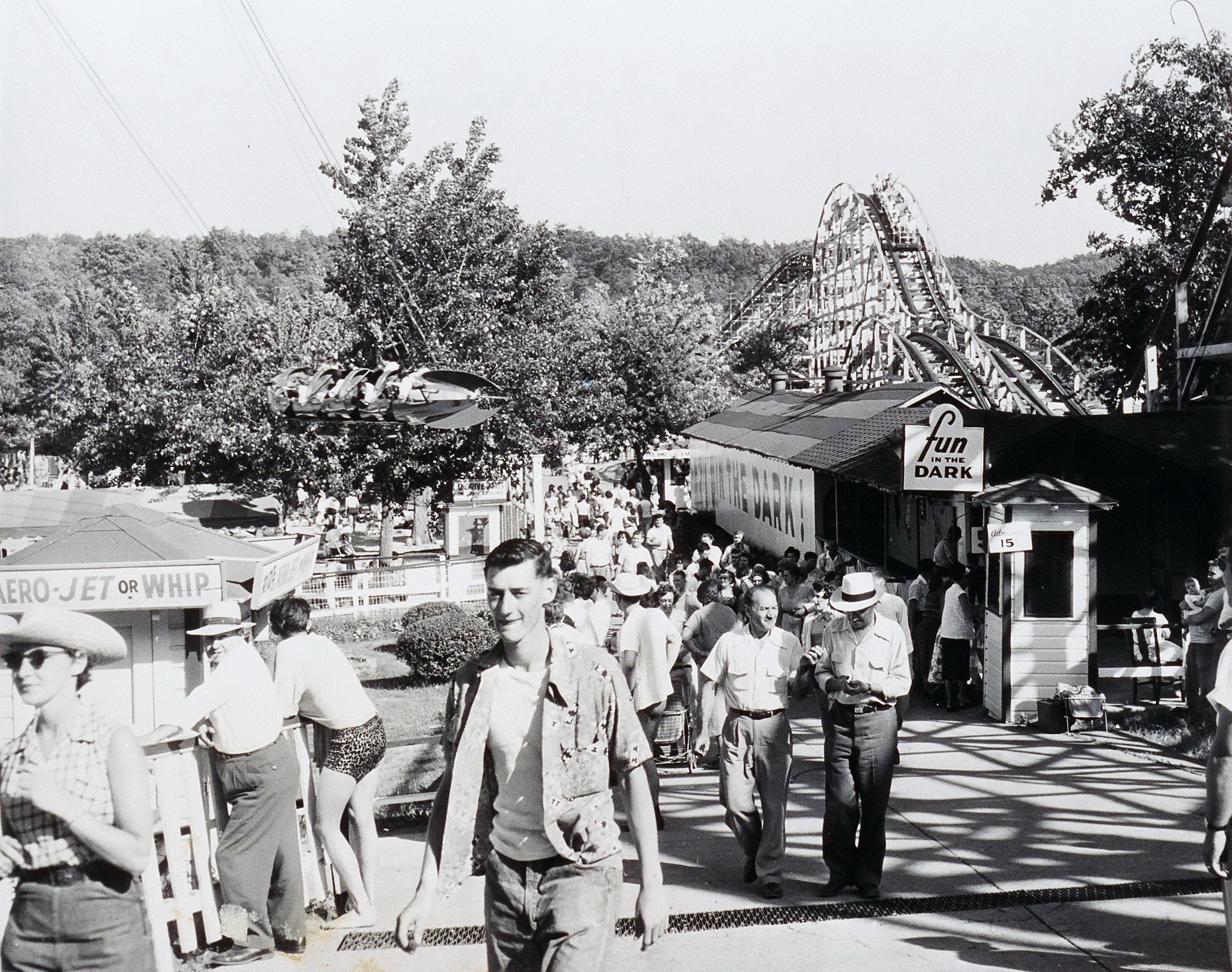 But America was changing and by the 1970s, Bertrand Island was feeling the competition from larger parks as well as the slowing of the baby boom. Other parks had already succumbed –Irvington’s Olympic Park closed in 1965 and the venerable Palisades Park shut down in 1971. Bertrand Island began to show its age and after 30 years in charge, Ray D’Agostino became interested in selling. Larger amusement park operators were not interested in acquiring the park, as it did not include sufficient land for expansion. Land values around the lake soared during this period, as did real estate taxes and insurance costs. The existence of an old-fashioned family amusement park at Lake Hopatcong was quickly becoming unfeasible. In 1978, Ray finally sold. While the new owner initially continued to operate the park, development of the land was clearly foremost on his mind. The park’s long run at Lake Hopatcong ended on Labor Day, 1983. 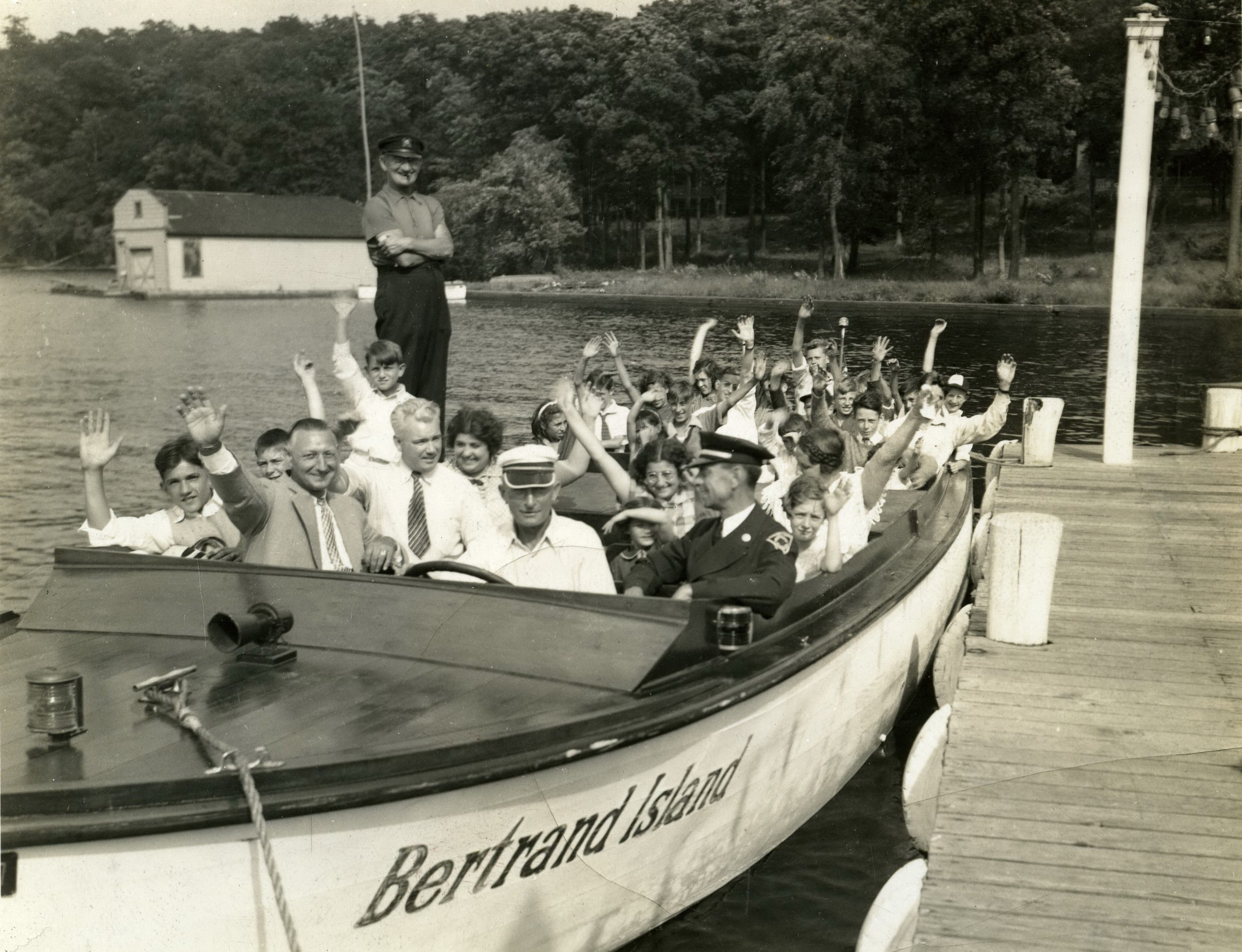 In the ensuing years, memories of the park have stayed very much alive. Those youngsters of the 1950s, 1960s and 1970s still vividly recall their times spent at Bertrand Island Park. Memories of the wooden roller coaster, the spectacular carousel, the Lost River, Boomerang, Nickel Nights, the penny arcade and many more were indelibly etched in the minds of so many residents of north Jersey.  So while the wood and concrete may be long gone, the park will live forever for those thousands and thousands who visited Bertrand Island Park.  The museum placed a monument at the site of the former entrance on Bertrand Island Road in 2008.