Called by Thomas Edison “the most versatile man in America,” Hudson Maxim was an inventor, scientist, author and explosives expert.   He was first drawn to Lake Hopatcong at the beginning of the twentieth century while working with the American Forcite Powder Company (formerly located in what is today the Shore Hills section of Landing).

Maxim fell in love with the area and purchased a large parcel on the west shore near Sharp’s Rock in 1901.  In 1904, he built his main house, initially known as Maximhurst and then simply as Maxim Park.  In 1906, Maxim built his famous Venetian style boat house, which would dominate the west shore for the next 50 years.  Built of stone and wood with two steel girders, it projected out over the water and resembled a medieval fortress.  It had three floors and featured stone fireplaces.  Maxim Park also included a laboratory, tennis courts, combination observatory/ice house and several guest houses for the many visitors he entertained. 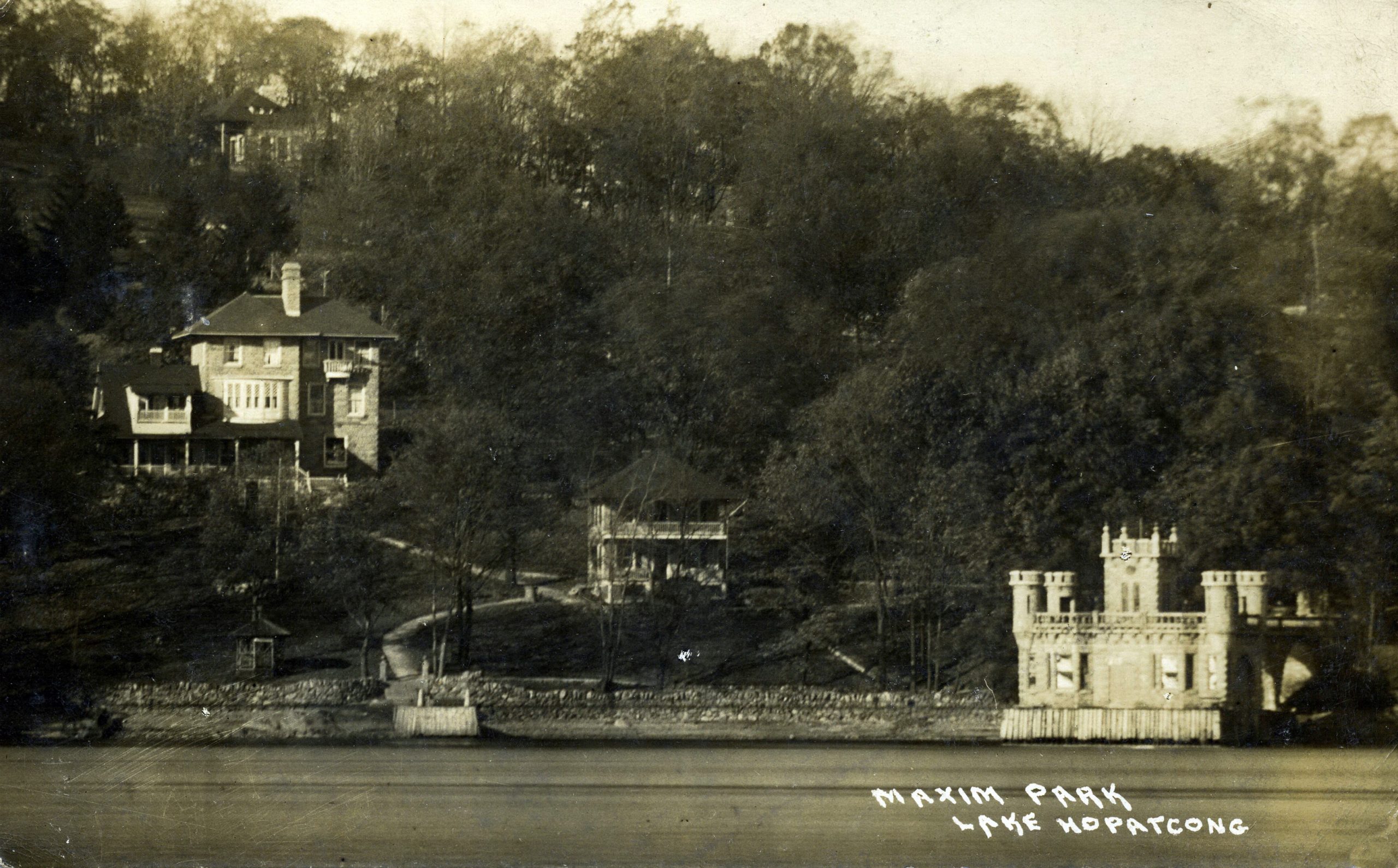 Maxim’s greatest fame came from his inventions in modern warfare, as the inventor of smokeless powder and other propellants, shells and torpedoes.  However, his many patents included such items as a new style coffee pot.  In spite of his many military inventions, he often lectured and wrote on the need for arbitration and not war.  He spoke and wrote prolifically on other topics as well – from his opposition of maintaining the Morris Canal to his disdain of Prohibition  to his love of poetry and boxing.  During the first decades of the twentieth century his name was known to most Americans and he was a confidant of presidents, having spent time with at least three.  While for many years he maintained a town house in Brooklyn, New York, Maxim spent most of the year at Maxim Park. 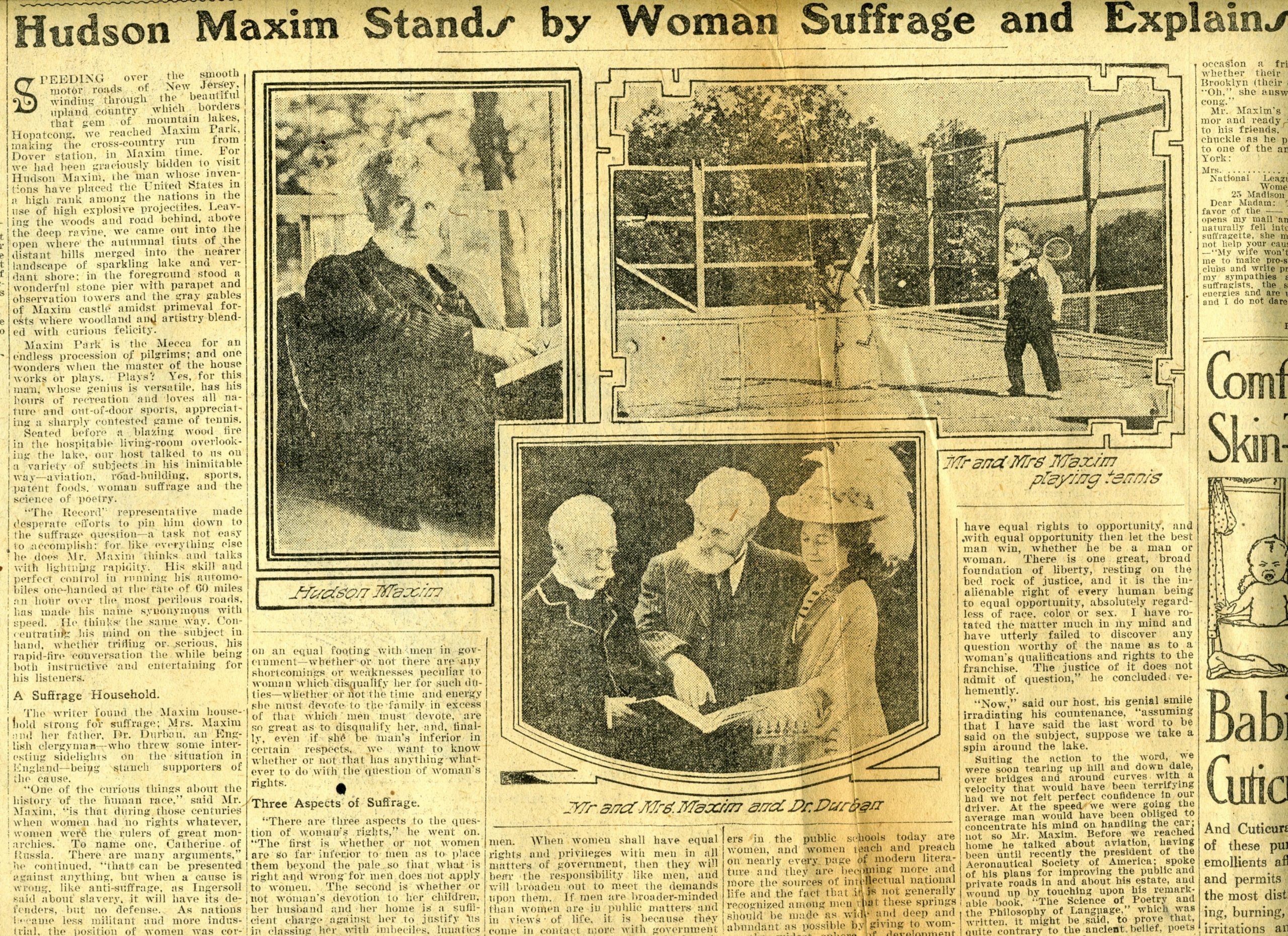 Maxim was extremely active in Lake Hopatcong’s daily life, serving as a councilman for the Borough of Hopatcong from 1907 to 1923.  Passionate about the lake, he also saw opportunities in its development.  In 1910, Maxim and his wife, Lillian, purchased the Byram Cove Land Company, which consisted of over 650 acres and 2-1/2  miles of lakefront – approximately three-quarters of what was then the Borough of Hopatcong.  His Maxim Park Land Company was responsible for much of the development of early Hopatcong (helping explain why the names Hudson and Maxim as well as his wife’s maiden name, Durban, occur frequently in Hopatcong).  In the course of developing their land, the Maxim’s donated several lots for public use including Byram Bay Christian Church, Maxim Park Yacht Club and lands which are now Modick Park and Maxim Glen.

Following Maxim’s death in 1927, Lillian continued to reside at Maxim Park.  In 1932, she remarried.  With her new husband, Michael Dee, a Rockland, New York attorney, she wintered in Grand View-on-the-Hudson and summered at the lake.  Following Lillian’s death in 1952, Mr. Dee donated many of what he considered to be Hudson Maxim’s treasures to the New York Public Library which still house his archives today.  Many of his other papers and photos reside at the Lake Hopatcong Historical Museum.

Although it had been Lillian Maxim’s wish that the Lake Hopatcong house become a museum dedicated to Hudson Maxim, it never occurred.  Regrettably, the main house and boat house were torn down in the late 1950s. The property was subdivided and two of Maxim’s guest houses and the garage survive today as private residences.  A modern boat house was built on the original concrete pillars around 1970 and the unique round ice house/observatory survives next door.  Much of the original stonework which landscaped the property is still visible along Lakeside Boulevard.  These many years later, Hudson Maxim is still remembered in Hopatcong.  In the 1920’s, the Hopatcong School was renamed Hudson Maxim School, a name which continued until the school recently closed.  A monument was dedicated to Hudson Maxim in 1928 at Hopatcong State Park, which is visible from Lakeside Boulevard.  In 2002, the Borough of Hopatcong established Maxim Glen Park and, in 2007, Sussex County placed a historic marker on Lakeside Boulevard at the former location of Maxim Park to acknowledge the site. 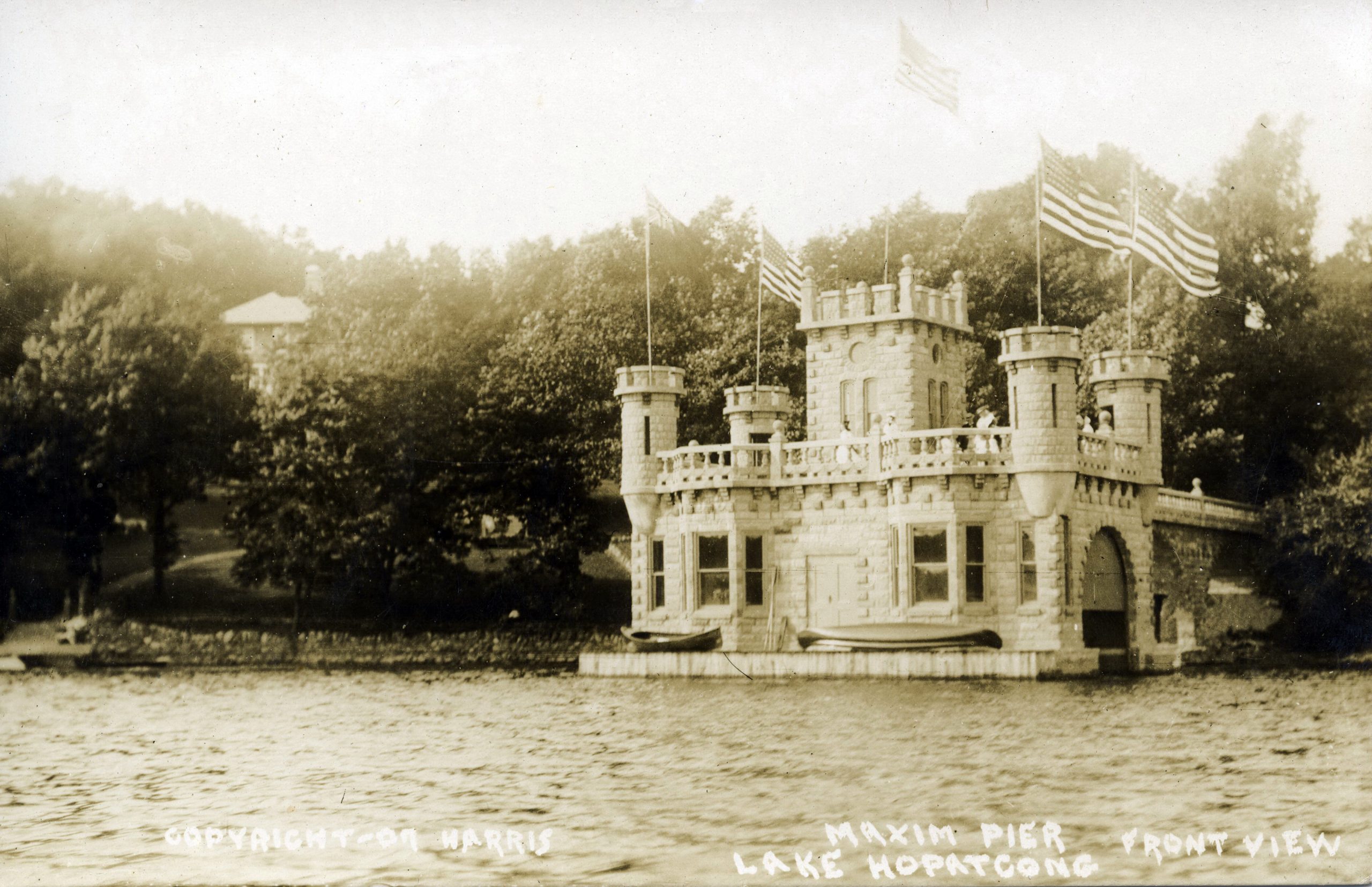