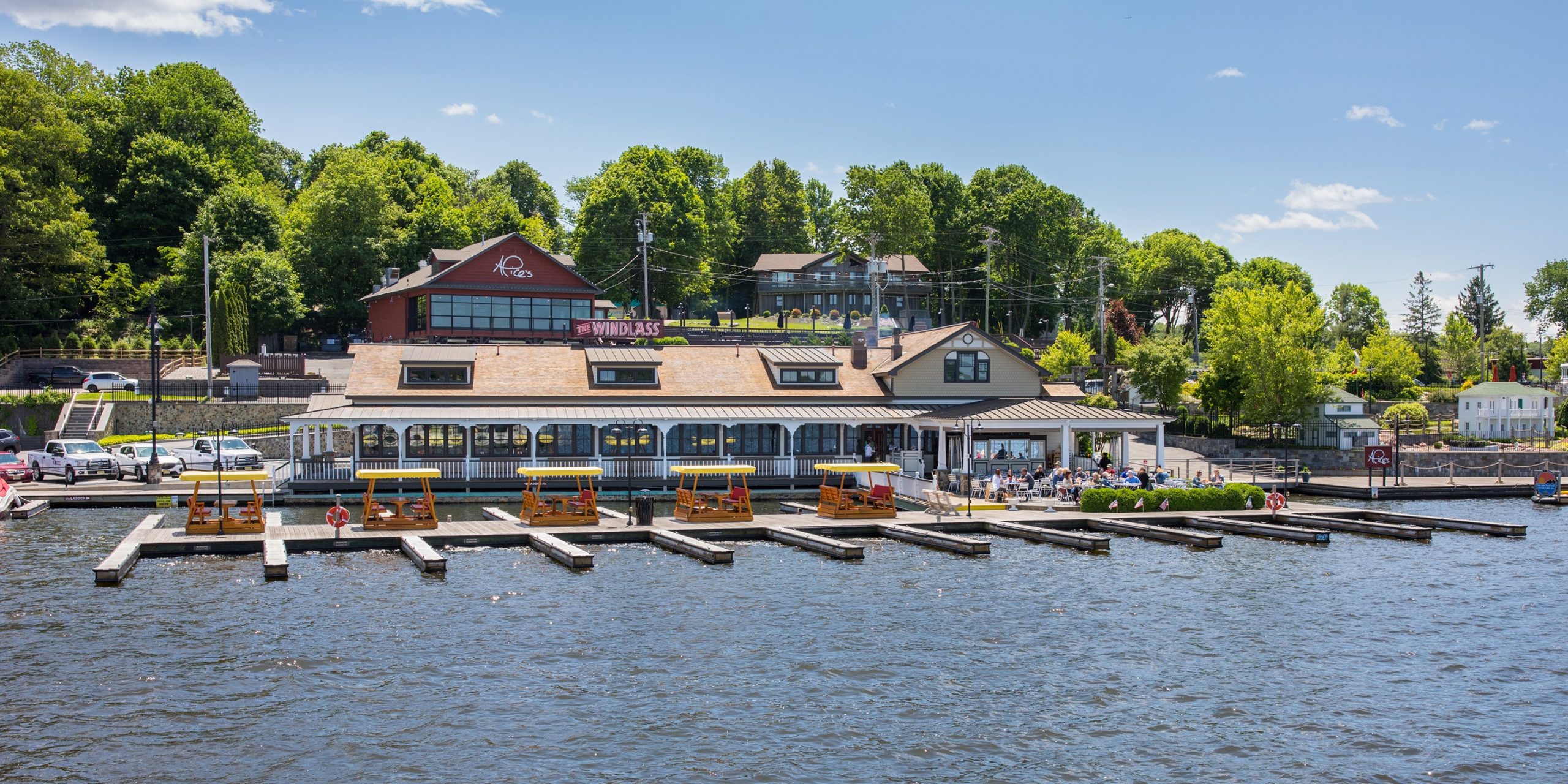 The Windlass is one of Lake Hopatcong’s most popular restaurants. Today, one may wonder how establishments such as the Windlass, Alice’s and the Jefferson House wound up at the end of a long winding road at Nolan’s Point, but the location was once a hub for visitors arriving by train at Lake Hopatcong. The Windlass site dates to the beginning of the lake’s rise as a resort – a time when the lake challenged destinations like Asbury Park and Atlantic City for the northeast summer tourist trade.  Tourism at Lake Hopatcong began on September 6, 1882, when the Central Railroad of New Jersey ran the first passenger rail service to its station at Nolan’s Point, located just behind where the Windlass sits today.  By the 1883 summer season, regular passenger rail service linked the lake to New York, Philadelphia, Jersey City, Newark, Elizabeth, Somerville, and Easton. For the first time, Lake Hopatcong was easily accessible from major population centers. 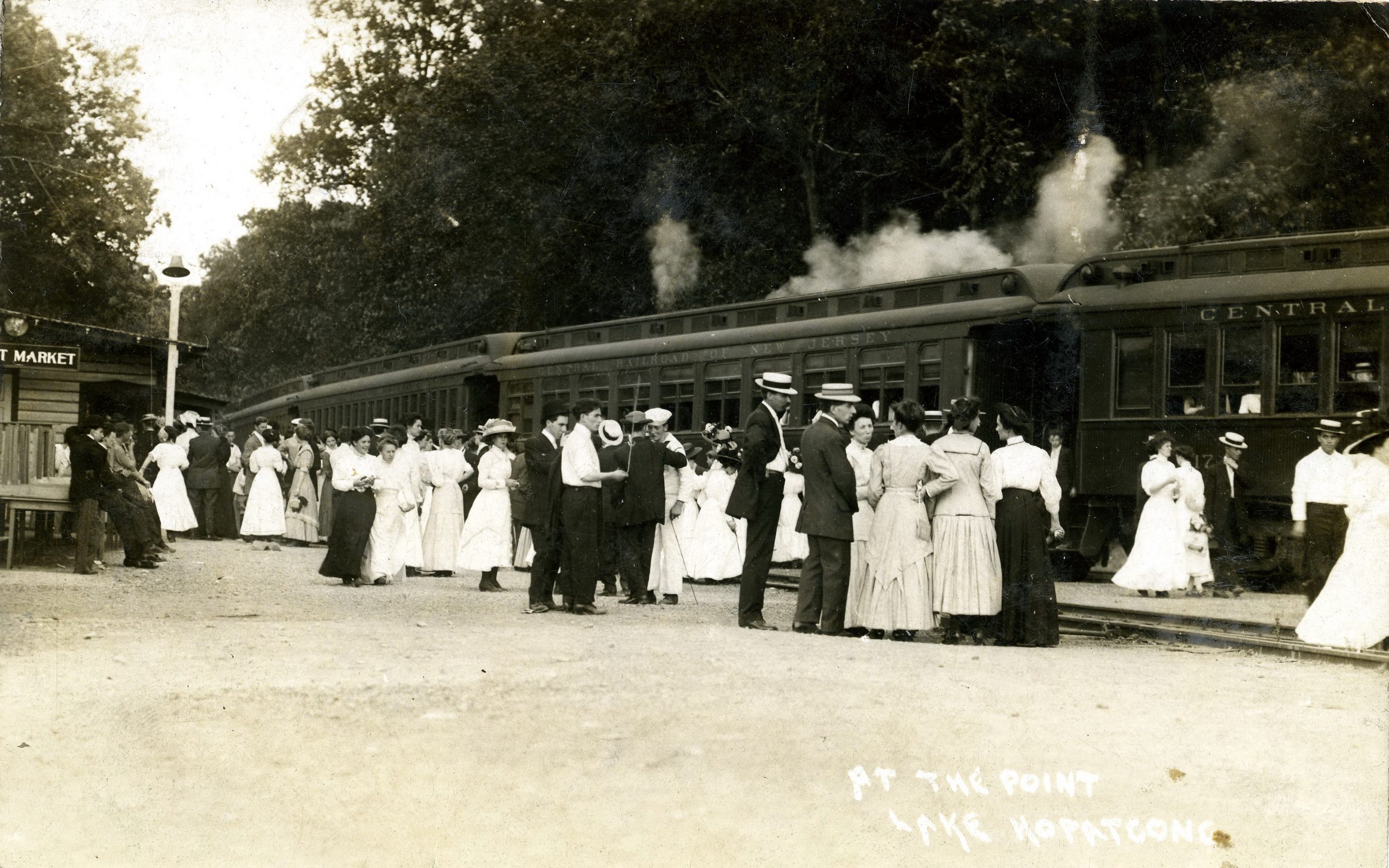 Passengers arriving on the Central Railroad’s new “excursion” trains to Lake Hopatcong found a large and enticing body of water with an almost entirely undeveloped shoreline. Railroad management quickly recognized the need for activities to interest and amuse passengers during their visit to the country. As a result the railroad leased land at Nolan’s Point for the construction of an entertainment pavilion. The Lake Pavilion Hotel was opened by John L. Allen in 1887. In addition to an orchestra every afternoon and evening, the new pavilion offered an ice cream soda fountain, confectionery, souvenirs, photograph studio and amusements including a shooting range and carousel. It also offered hotel accommodations for about 50 guests at a weekly rate of $9. As the center of lake life, Nolan’s Point also hosted early regattas and annual events like the Orchestra Ball and Lake Hopatcong Steamboat Men’s Ball. Business prospered, and by 1900 the pavilion was known simply as Allen’s Pavilion to most lake visitors and residents. 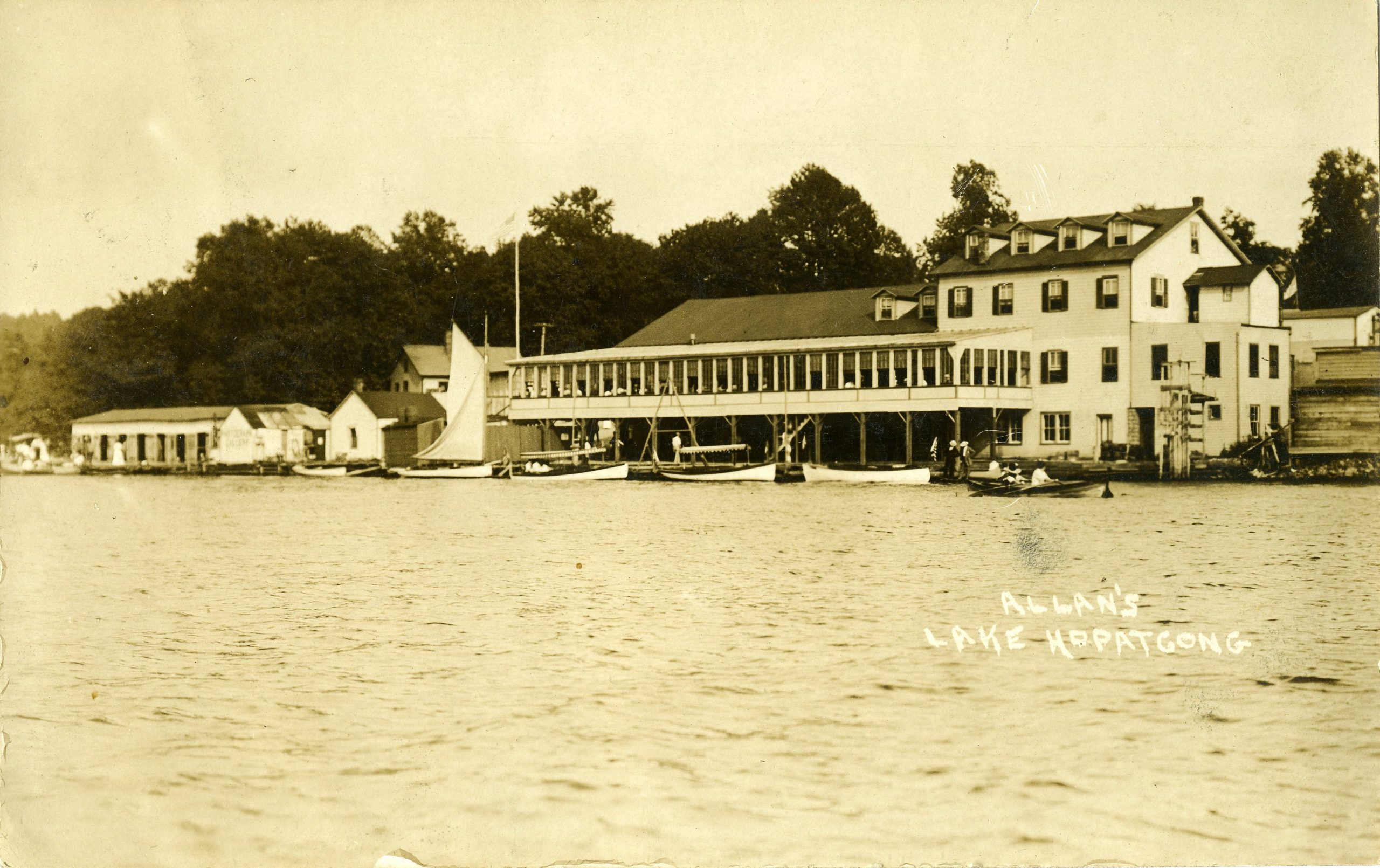 In 1902 the pavilion offered various types of boat rentals, a billiards and pool parlor, rifle ranges, barber shop, grocery, confectionery, and long distance telephone service –  then a rarity at the lake. Management claimed the location was in the midst of Lake Hopatcong’s best fishing grounds and advertised it as the “Coolest Joint on Lake Hopatcong.”

A bathing pavilion, separated from the main pavilion by a picnic grove, was opened in 1903 on what is today Nolan’s Point Park Road. The July 18, 1903 issue of the Lake Hopatcong Breeze reported that the water at the new bathing pavilion was “not over six feet deep at any point” with a sandy bottom “instead of the rocks in most parts of the lake.” Visitors were encouraged to rent swimming attire and “come from the water feeling like a new man very much invigorated.” 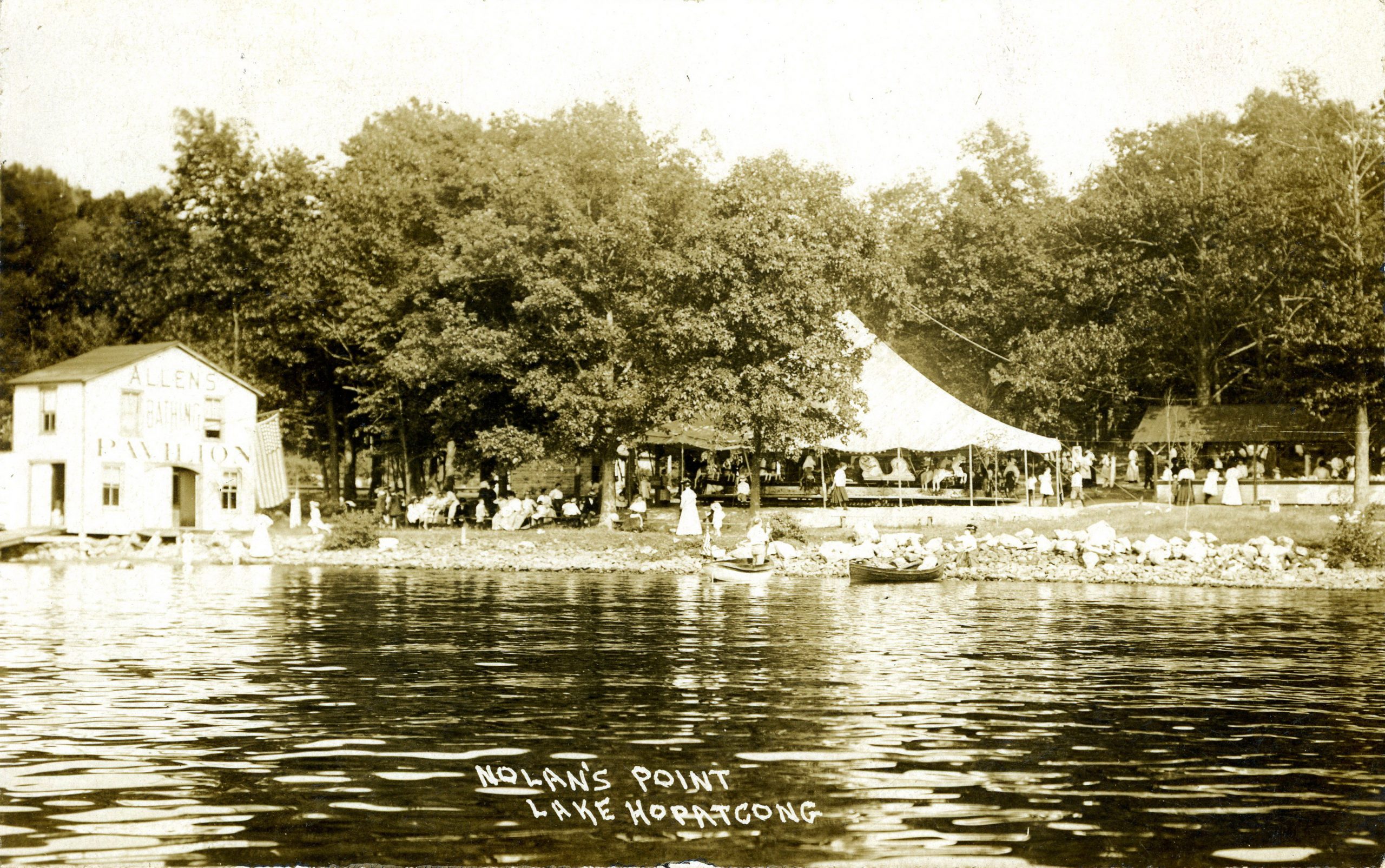 Allen’s pavilions were repeatedly destroyed by fire in 1894, 1908 and 1919, but each time was rebuilt as a larger and more modern pavilion. During this period another large pavilion was built nearby, on the site of the current Jefferson House Restaurant, and several hotels opened on the hill overlooking Nolan’s Point. Due to the tremendous amount of summer activity, Nolan’s Point was often referred to – both favorably and negatively – as “Lake Hopatcong’s Coney Island.” 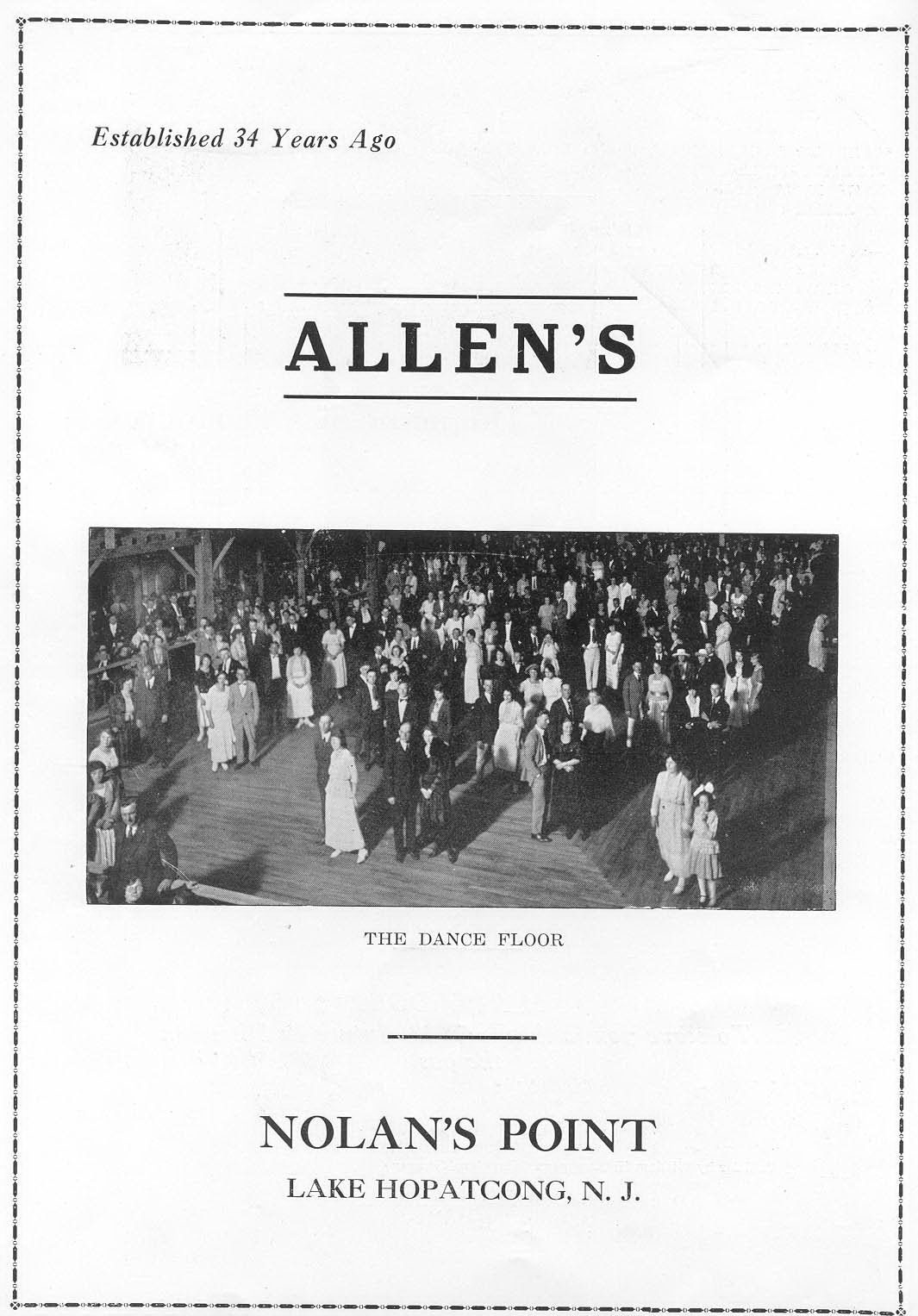 A 1924 advertisement named Allen’s Pavilion the “oldest amusement centre in Northern New Jersey.” In 1928, the Allen family sold the pavilion after 41 years of ownership, and the property became part of the new Nolan’s Point Amusement Park. While assorted amusements had been present at Allen’s for many years, Nolan’s Point Amusement Park’s goal was to effectively compete with Bertrand Island Park which had been enjoying success. The new amusement park built a roller coaster of its own and included such rides as an “aeroplane” swing, whip, dodgem cars and carousel. The new park catered to the nation’s big band craze by featuring the music of Frank Daly and his Meadowbrook Orchestra in a dance pavilion advertised as seating 1,000. 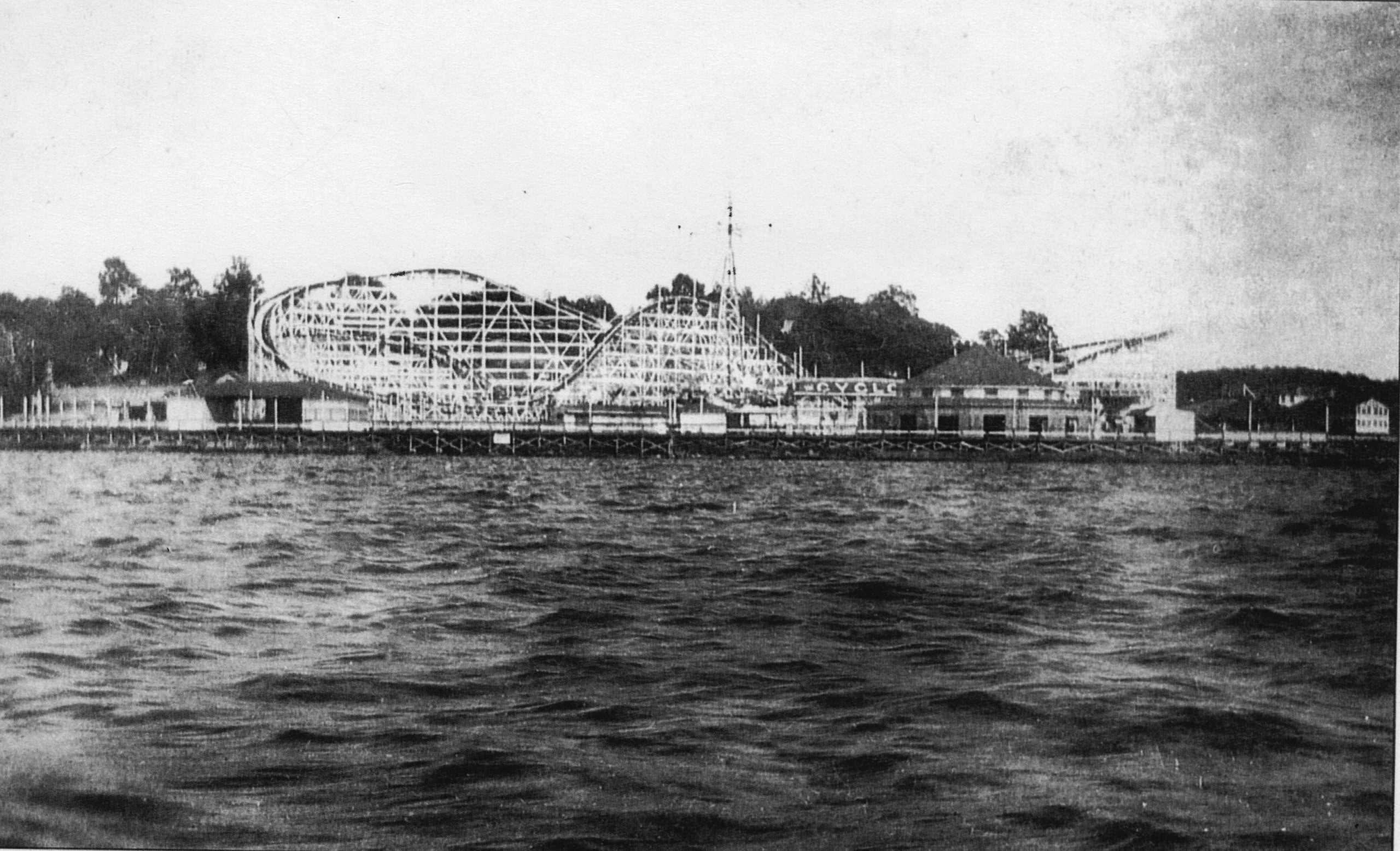 Nolan’s Point Amusement Park was largely dependent upon visitors arriving by train. However, in the late 1920s cars were rapidly replacing trains as the preferred method of transportation. As the Central Railroad of New Jersey’s train service to Nolan’s Point declined, so did business at the park. With limited parking and poor road access, the park was not able to accommodate the growing automobile trade as well as Bertrand Island.  The Great Depression added to the challenges facing Nolan’s Point Amusement Park. Some 75% of America’s amusement parks were forced to close as America struggled through the Depression, and it became apparent that Lake Hopatcong could not support two parks. Nolan’s Point Amusement Park went bankrupt in 1931, briefly re-opened under new management, and closed permanently in 1933.

Frank Crater took over the property, including the former Allen’s Pavilion, following the closing of Nolan’s Point Amusement Park. Crater had been involved for many years running the billiards parlor, barbershop, and boats at various times for Allen’s Pavilion. By 1935 he reopened the dance hall, dining room and tavern, picnic grove, and beach. In 1936, with business suffering due to the Depression, Crater had the dance floor converted into Lake Hopatcong’s first roller rink.  Throughout this period, organized group trips arriving on chartered trains continued to visit the picnic grove and beach. However, the termination of railroad service to Nolan’s Point in the late 1930s necessitated Crater closing the picnic grove and beach. 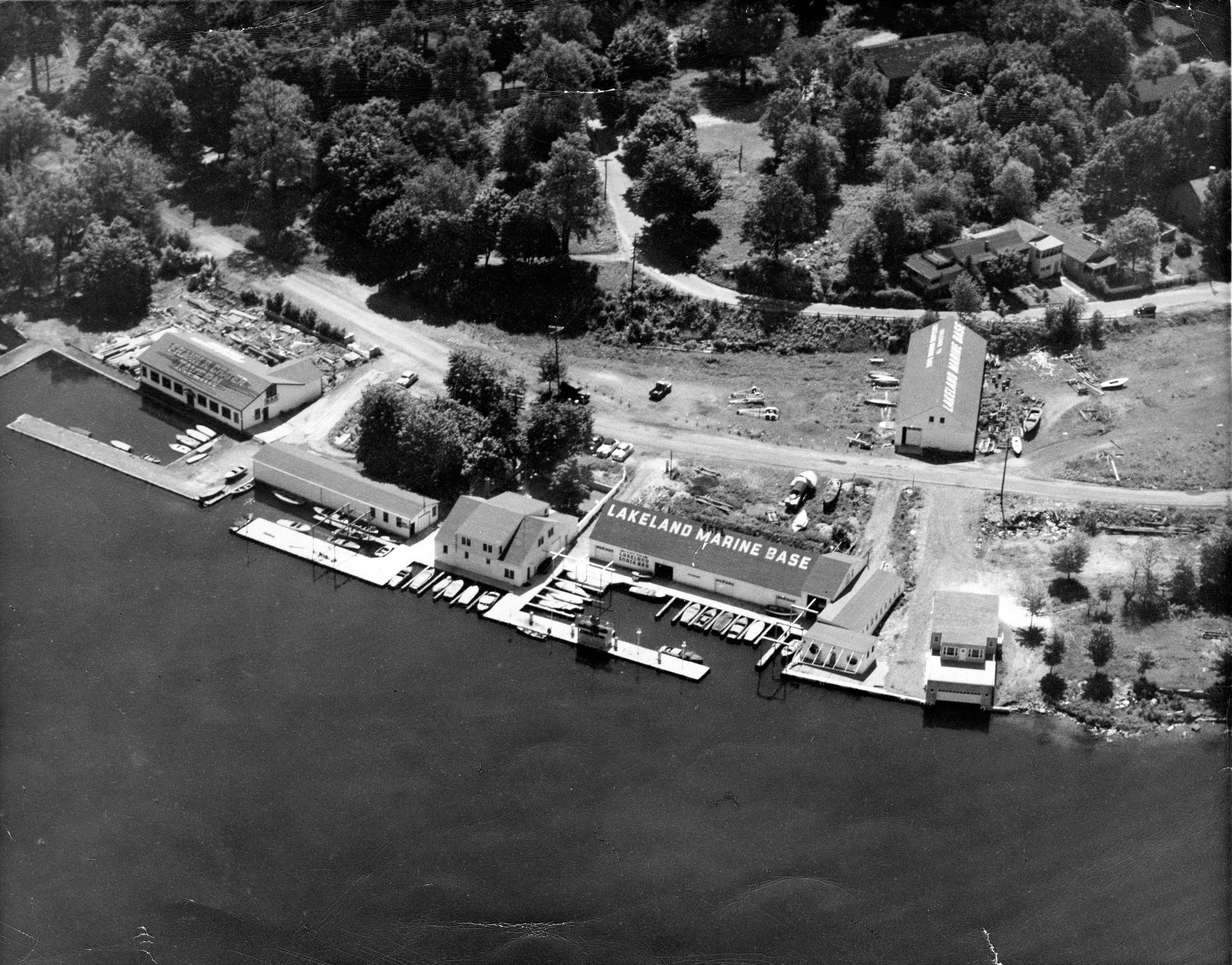 Heavy snowfall during the winter of 1947-1948 caused significant damage throughout the Lake Hopatcong area. That February, the second floor roller skating rink at the pavilion collapsed. Frank Crater was able to salvage part of the building and the new, smaller structure became a tavern. Crater’s Tavern operated until 1963, when it was sold to Ralph Spinelli, Sr. and his wife, Amelia. The new owners renamed the establishment the Windlass and opened it as a luncheonette for fisherman and boaters. Together with their son, Ralph, Jr., they transformed the luncheonette into a full-scale Italian restaurant during the 1960s which quickly became a Lake Hopatcong favorite. The “Italian Garden,” a lakefront outdoor dining area, was added in 1981. 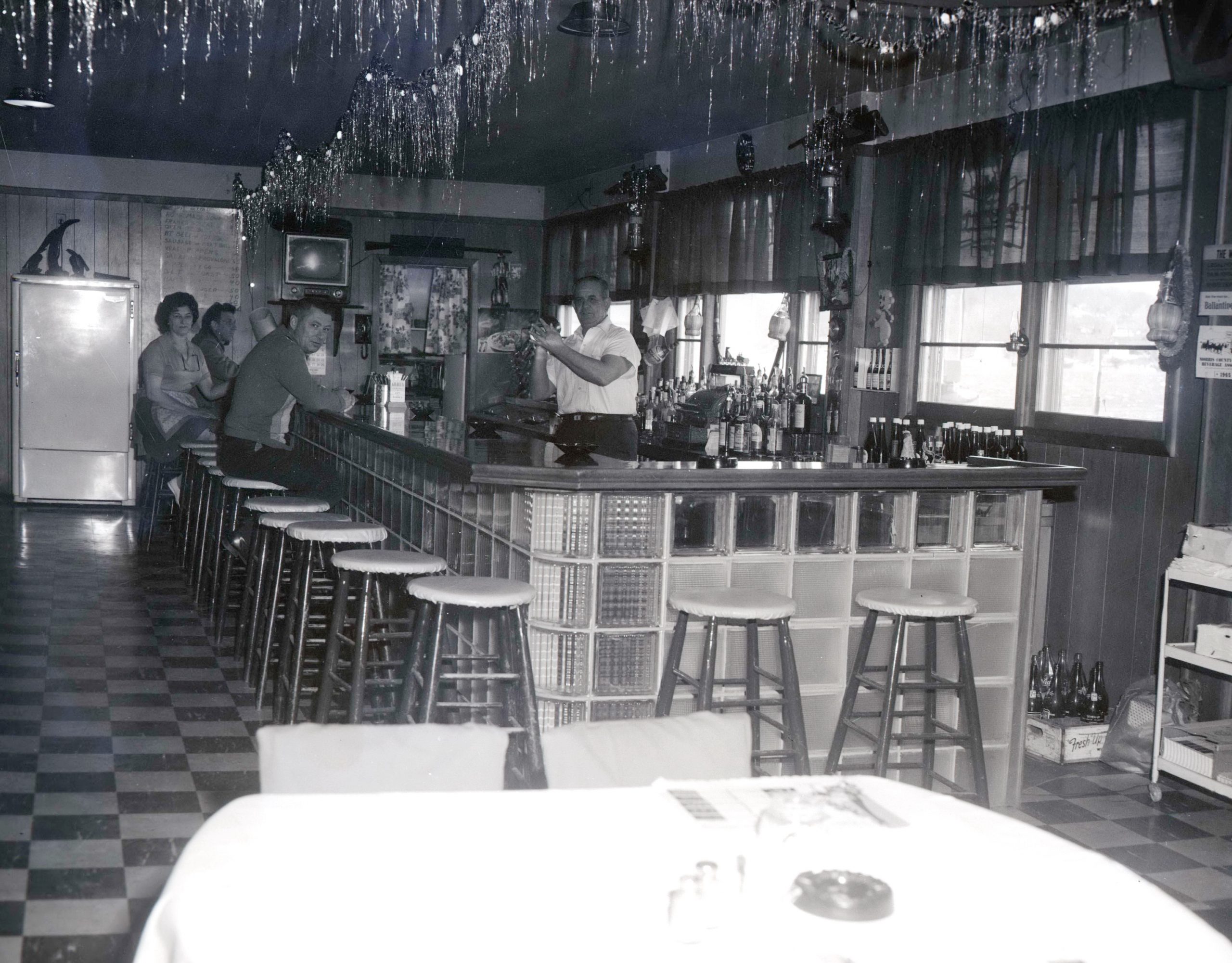 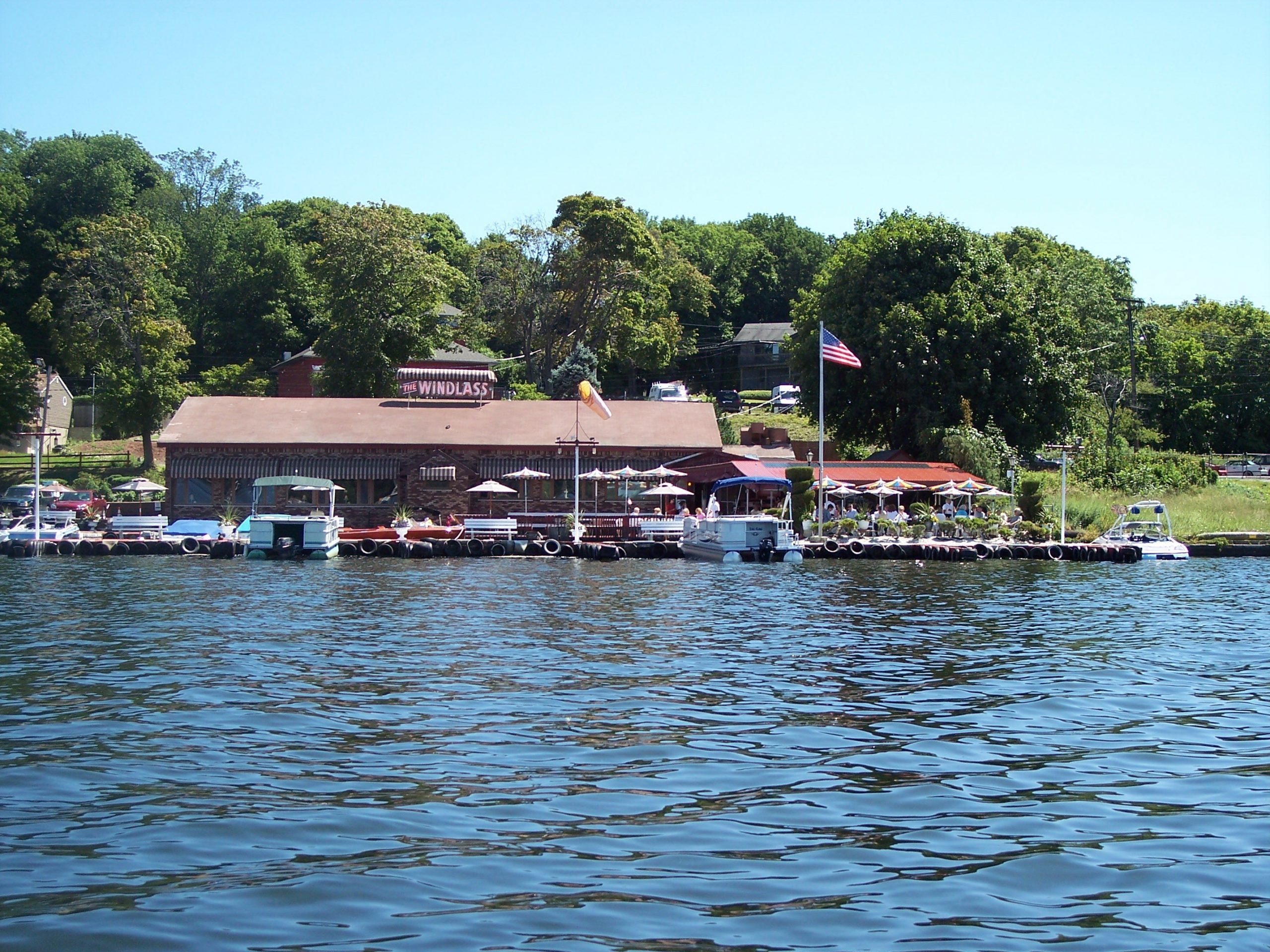 The Windlass remained in the Spinelli family for 51 years, with Ralph Jr. taking over and, along with his wife Rina and his mother, continuing to serve quality food at reasonable prices. Contemplating retirement in Florida, Ralph and Rina Spinelli sold the Windlass to Alice Szigethy in August 2014. A major renovation undertaken the following year introduced a boat-themed bar, beautiful woodwork, and dockside canopy swings. Offering a varied and interesting menu and frequent entertainment, the Windlass has now developed a solid business all year long. From the earliest amusements to the popular menus of today, this spot continues to be one of the “coolest joints on Lake Hopatcong.”