Lake Hopatcong played host to many celebrities during its resort era.  While many were well known from the New York stage or the vaudeville and burlesque circuits, the lake’s famous folks represented all fields and included one of America’s most popular authors of the day.  Rex Beach wrote 33 novels, hundreds of articles, and two successful plays, thrilling several generations with his tales of adventure in such exotic locations as Alaska and Central America.  One of the most popular American novelists of the early 20th century, Beach wrote several of his books right here at Lake Hopatcong. 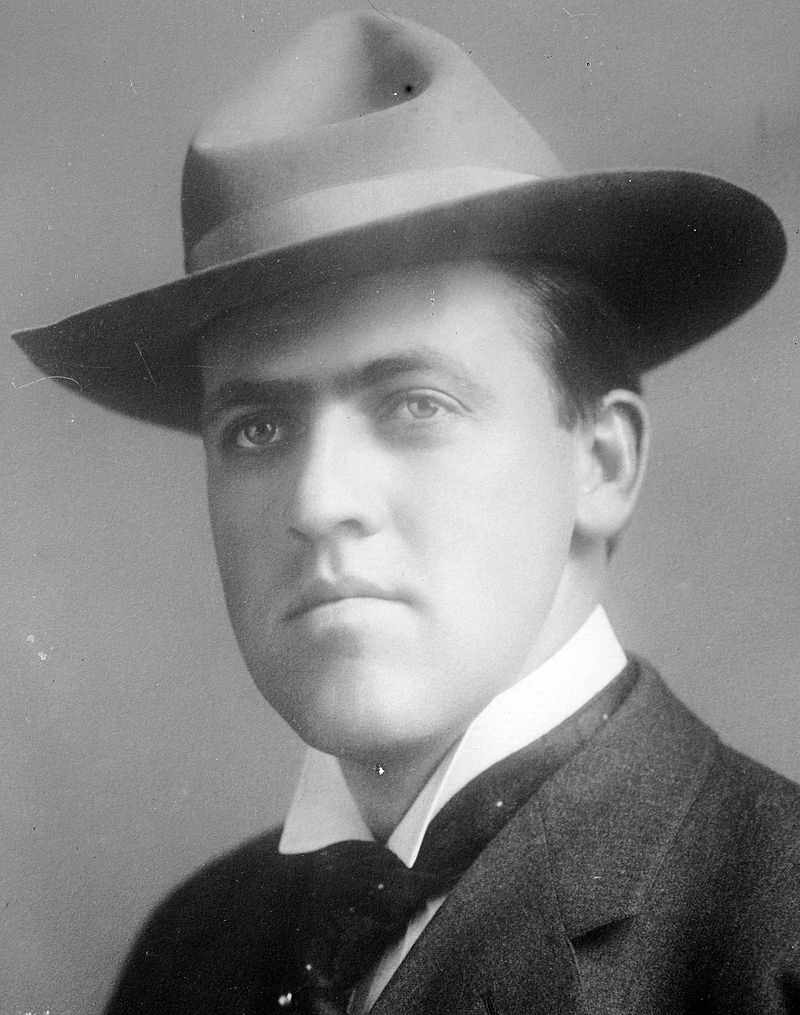 While studying law and working with his two brothers, who were partners in a Chicago law firm, Beach was lured to Alaska by the Klondike gold rush in 1897.  Spending parts of the next five years there, he would not find his fortune in gold but rather in fiction.  While in Alaska, Beach was introduced to the tales of Jack London and realized that he could turn his own experiences into stories.  His first book, Pardners, written in 1905, was a collection of ten short stories of life in Alaska and the West.  His next work, a novel entitled The Spoiler, was first serialized in Everybody’s Magazine, and then published as a novel by Harper and Brothers in 1906.  It was based on a true story of corrupt government officials stealing gold mines from prospectors which Beach witnessed while in Nome, Alaska during the gold rush days.  The Spoilers became an immediate best seller.

In 1907, Beach married Edith Greta Crater of Denver, Colorado.  Greta, as she preferred to be called, was an actress who Beach had met in Nome.  While on his honeymoon it is said that he was working on his novel, The Barrier, which made the best sellers list in 1908.  The next year The Silver Horde made the best seller list.  The allure of the Alaskan wilderness captivated the public that lived the adventures of the frontier through Beach’s writings.  Many of his stories and novels were also turned into popular box office hits, made and remade, spanning the eras of silent movies and into the days of the “talkies.”  The Spoilers became a stage play an was then was filmed as a movie five times between 1914 and 1955, with Gary Cooper and John Wayne each playing the lead in 1930 and 1942, respectively. 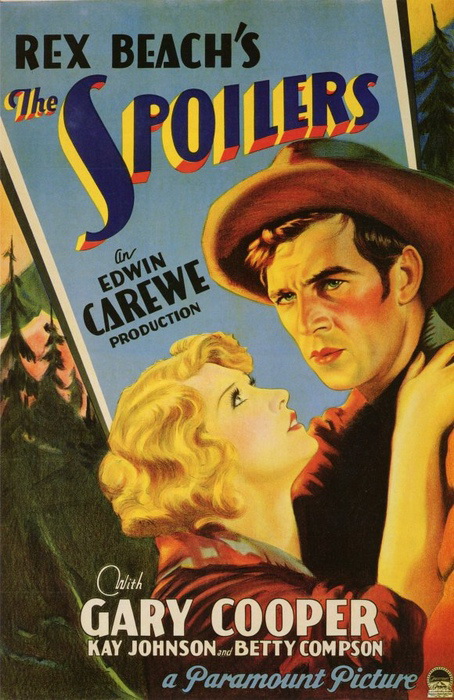 While Beach’s early novels were about Alaska, later books featured other locales that he visited.  By 1926, his publisher advertised that more than three million of his books had been sold.  While a prolific writer, Beach also dallied as an actor, producer, playwright, and adventurer, and even took part in the 1904 Olympics in water polo.  Beach may have made his most long lasting mark as the first American author to insert a clause about movie rights into his contracts.  This concept of royalties for the author of a book used for a movie changed the industry and proved quite profitable to Beach.  In addition to The Spoilers, fourteen of Beach’s other novels were turned into motion pictures. 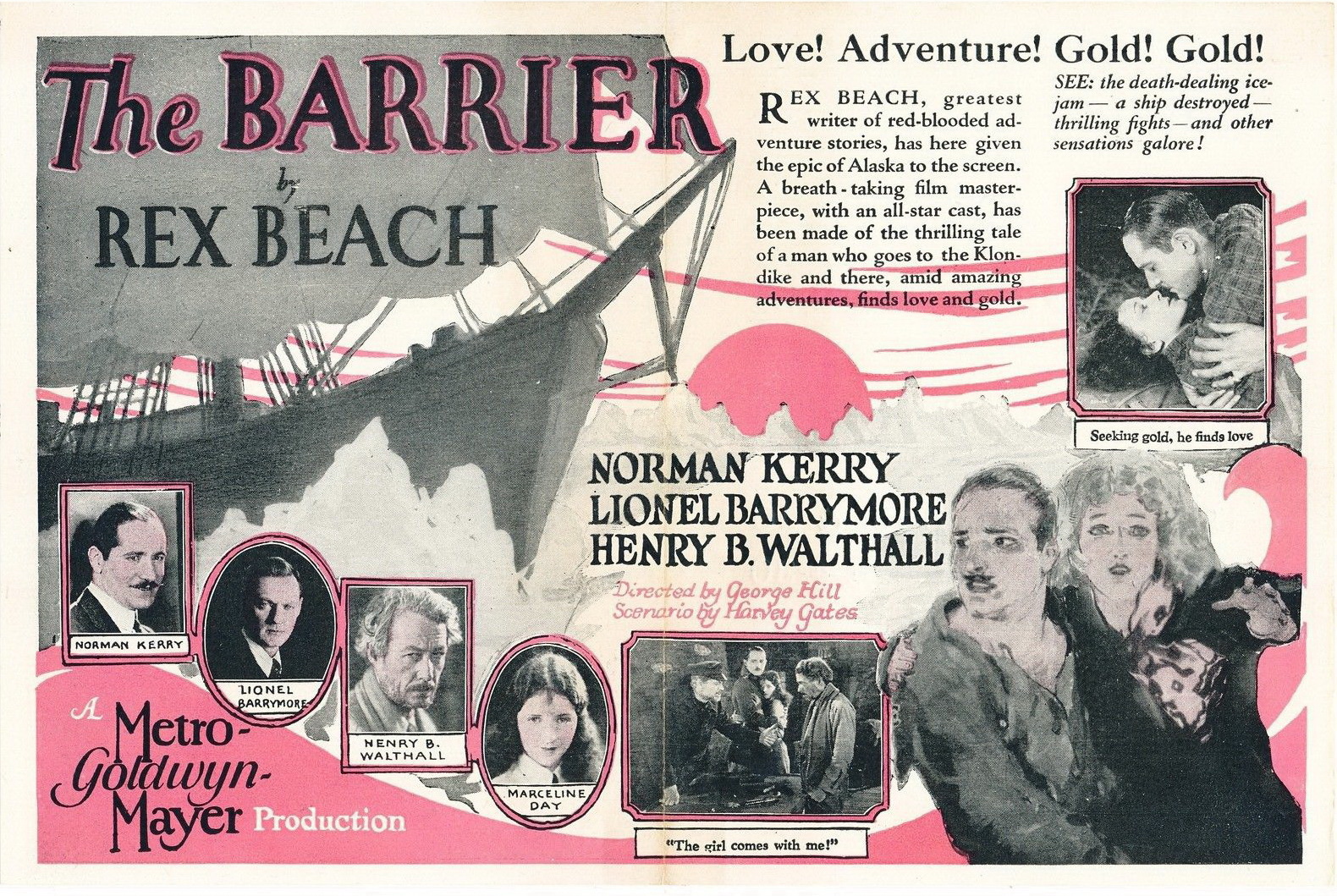 Despite being among the most popular books in the country in the early 1900’s, Rex Beach’s novels are not well remembered today.  Florida historian Mike Miller wrote that, “Regular people loved his books, but intellectuals and critics did not like his stuff, referring to them as the ‘he-man school of literature,’ or ‘pot boilers.’  Beach cried all the way to the bank.”

In later years, Rex and Greta Beach settled in Sebring, Florida, where Beach went into the farming business raising cattle and crops.  He owned 7,000 acres near Sebring and 5,000 acres near Indiantown.  It was said he made a second fortune by growing gladiolus bulbs.   Although Beach continued to write until his death, his output slowed during these years in Sebring and he died there in 1949.

It appears that Rex Beach was introduced to Lake Hopatcong during the summer of 1910.  He and his wife were living in New York City and were invited to visit Hudson Maxim.  Evidently he was impressed by his stay with the Maxim’s and in 1911, Beach and his wife purchased a home on Chincopee Avenue facing Henderson Cove (next to where the Raccoon Island Ferry docks today on the mainland).  The July 1, 1911 Lake Hopatcong Breeze reported that “Mr. Rex Beach, the novelist, has been at his summer home since May 15th and intends to remain for the season unless business calls him away.  He has already started a new book.”  For the next five years, Rex and Greta would spend most of their summer vacation time at the house they called “Mañana.”  They regularly entertained guests including his brothers and their families from Chicago, his wife’s family (which included Greta’s sister who was married to early Hollywood star Fred Stone), as well as business associates and friends. 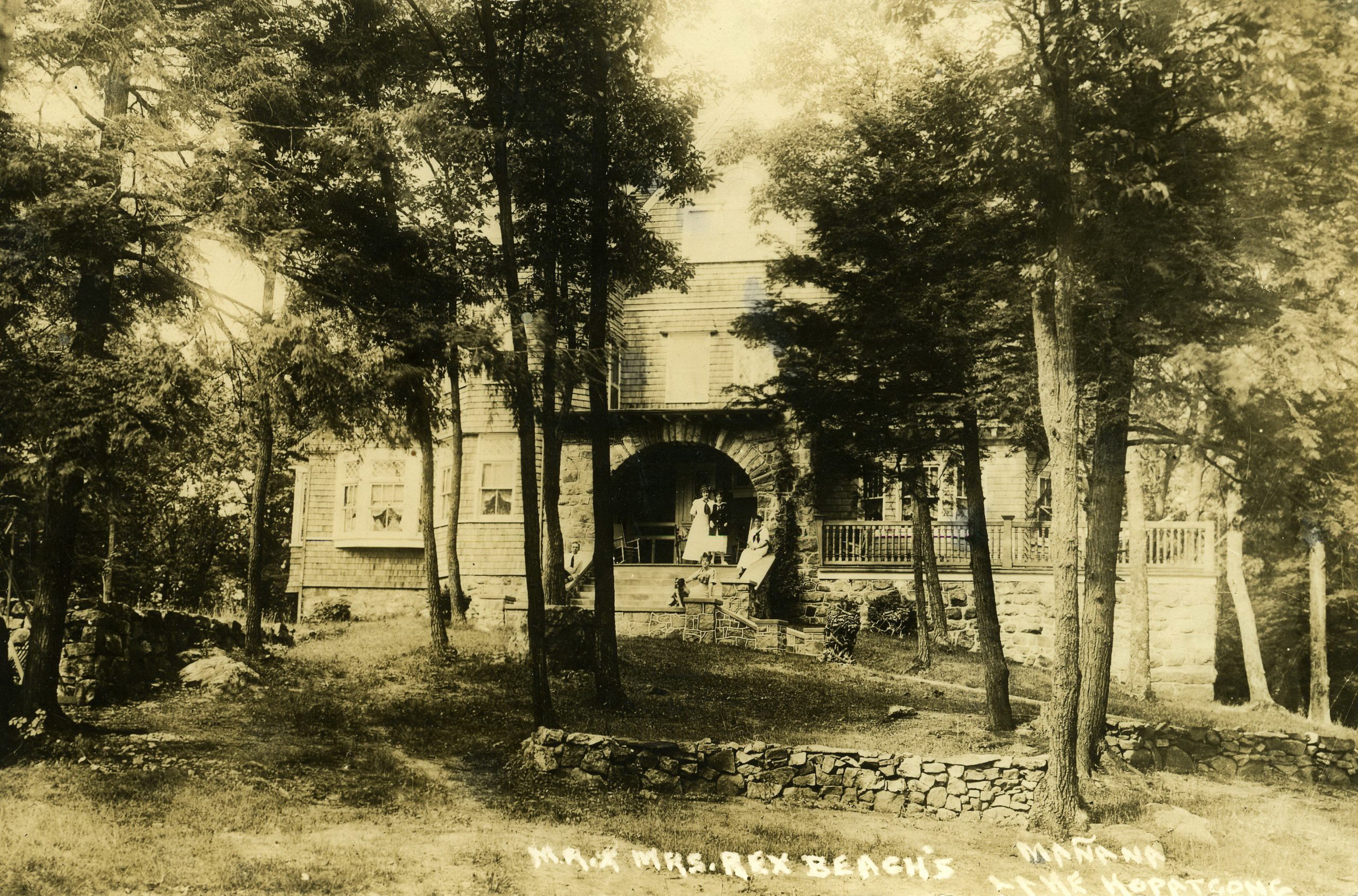 A September 9, 1911 article in the New York Times reported that, “Rex Beach, whose new novel, The Ne’er-Do-Well has just been published goes back and forth between his home at Lake Hopatcong, N.J. and New York” and Beach was quoted in the article as saying “I can’t work here.  I’d rather swim or fish.  There’s and old fellow lives across the lake that I go fishing with, and he and I are great tillicums – that’s Indian for pals or chums.  Of course, I’d rather swim or fish than write.  But writing is a good game.  Such a good game it’s a wonder to me the police don’t get after us for taking money for it.”

The July 12, 1913 Breeze reported that Beach was working on a novel about New York social life and that he had planned on writing it a year earlier but there was greater demand for a northwestern story and he wrote The Iron Trail instead.   In fact, advertisements for The Iron Trail used a photograph showing Beach writing at Lake Hopatcong. 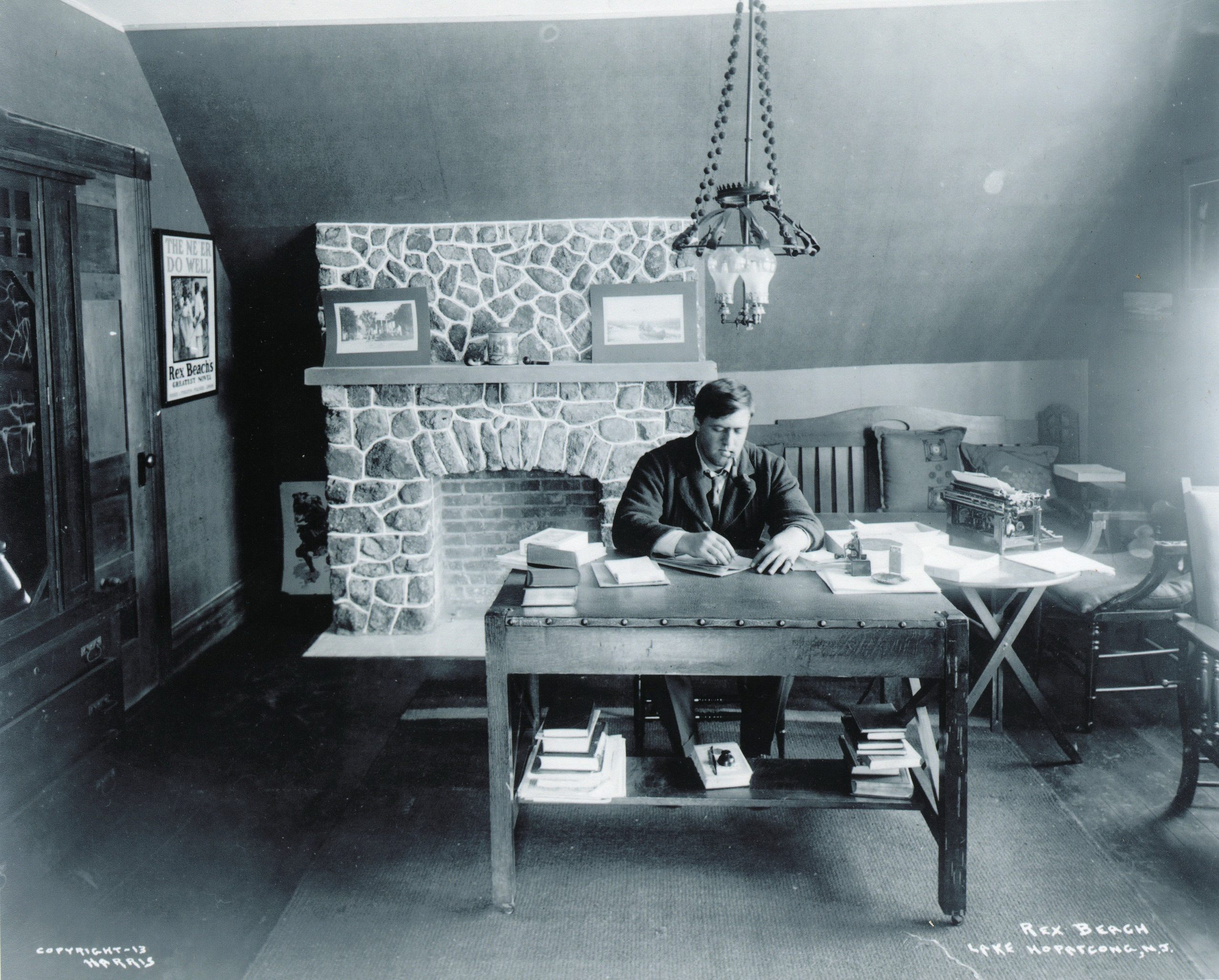 Rex Beach was quite the boating enthusiast and was often seen speeding across the lake.  He owned several speedboats including the Going Some and Ne’er Do Well, both named after novels, and later the Greta, a 20’ mahogany hydroplane with a six cylinder Sterling engine named for his wife.  Beach was an early member of the Lake Hopatcong Yacht Club and actively participated in their motorboat races.  In those years, the yacht club had a tennis court and Beach, who had a passion for the game, representing the club in local competitions. 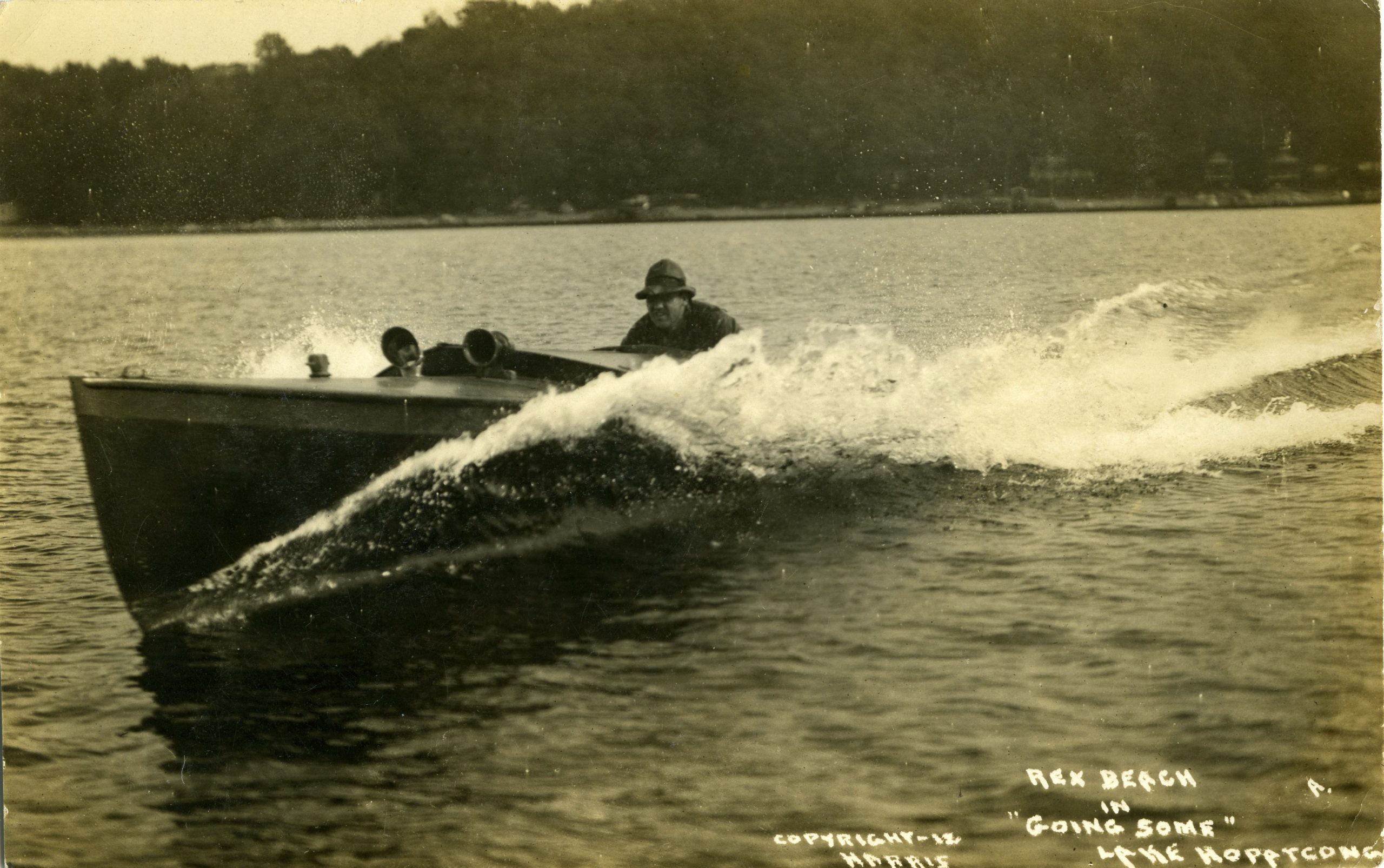 Beach’s normal days at the lake reportedly consisted of writing in the morning and a combination of tennis, boating, swimming, and fishing in the afternoon.  When a group of local residents began putting together plans for a new yacht club on the northern part of the lake, Beach took an active role and served as the first treasurer of the Maxim Park Yacht Club when it was formed in 1914.  His presence helped give the new club instant credibility. 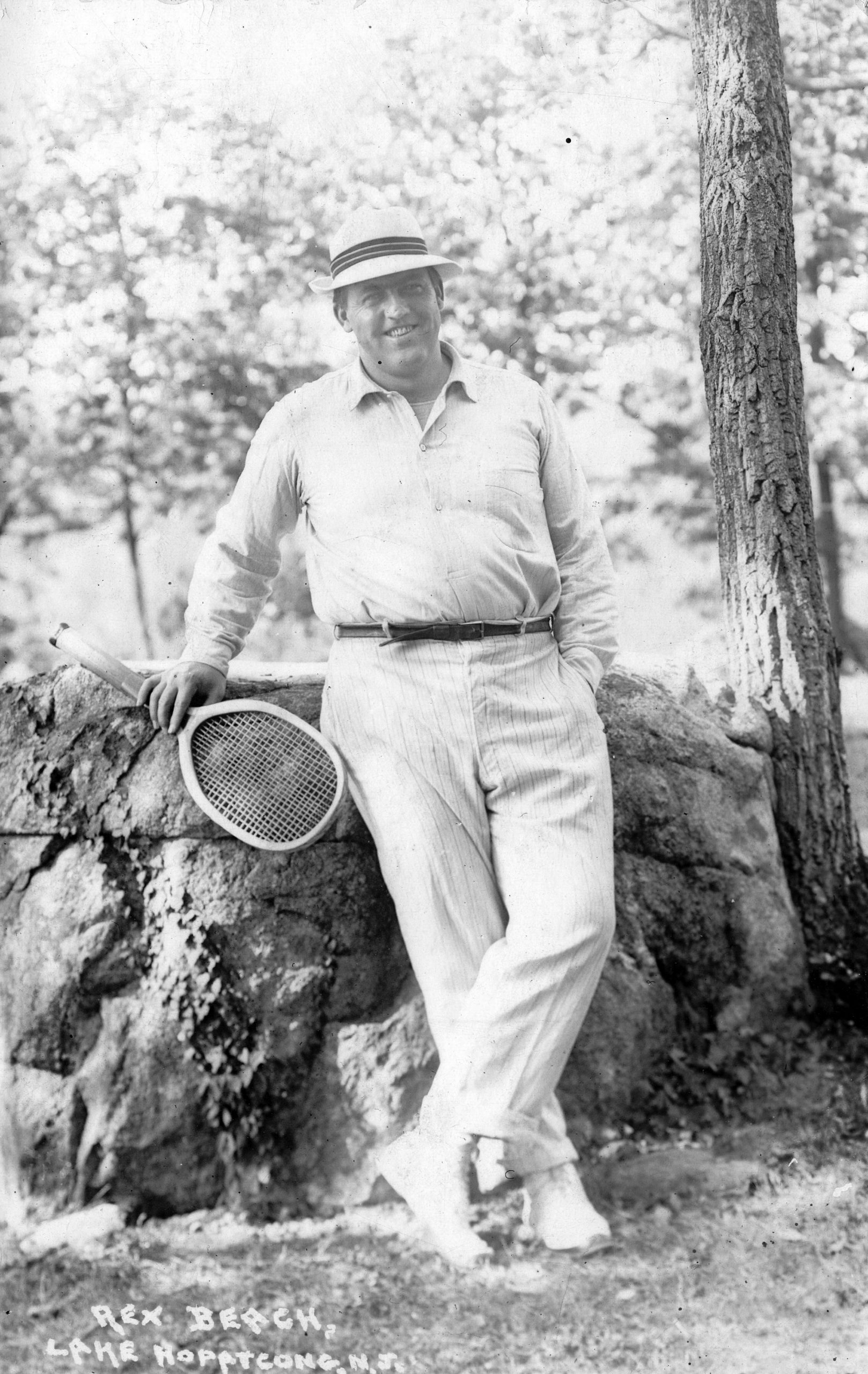 Not one to stay in a place for too long, Beach put “Manana” on the market in 1916.  The house would eventually be purchased by Dr. E.H. Killheffer in 1919.  Unfortunately, it burned in April 1920.  A house which was immediately rebuilt to very similar plans on the site still stands today.  Beach meanwhile left the lake for other “adventures” and an exciting chapter at Lake Hopatcong was over.